Fan-made concepts envisioning an iPhone with a laser projection keyboard are so captivating that even Fox 5 News thought the iPhone 5 has one built-in. While we have our doubts as to whether or not Apple would even consider such a technology, the prospect is tantalizing, at least on the paper. And now, one company has sought out to turn it into a reality. Enter the aptly named Magic Cube from Celluon.

What this gadget does is it enhances your device with a cool laser projection keyboard while also doubling as a virtual multi-touch mouse for your computer. Just to dispel any doubts: it’s not a proof-of-concept. This thing is as real as real gets and works as advertised. The little Bluetooth accessory will effectively laser-project a full-size QWERTY keyboard on nearly any flat, opaque surface to let you type away on its big virtual ‘keys’…

Built on Celluon’s Electronic Perception Technology, the Cube has the laser keyboard pattern projector, which does exactly what the name implies, and the central optical sensor working in tandem with the infrared layer emitter to determine the exact position of your fingers as you type.

It’s small and light enough to be carried around and because it uses Bluetooth, setting it up is as simple as pairing a Magic Box to your iOS device or a Mac.

I love the power saving mode invoked with a ‘key’ combination and how you turn it back on with a gesture. Celluon says that because the Magic Cube uses an invisible infrared layer, typing is “a little bit different” than with physical keys. 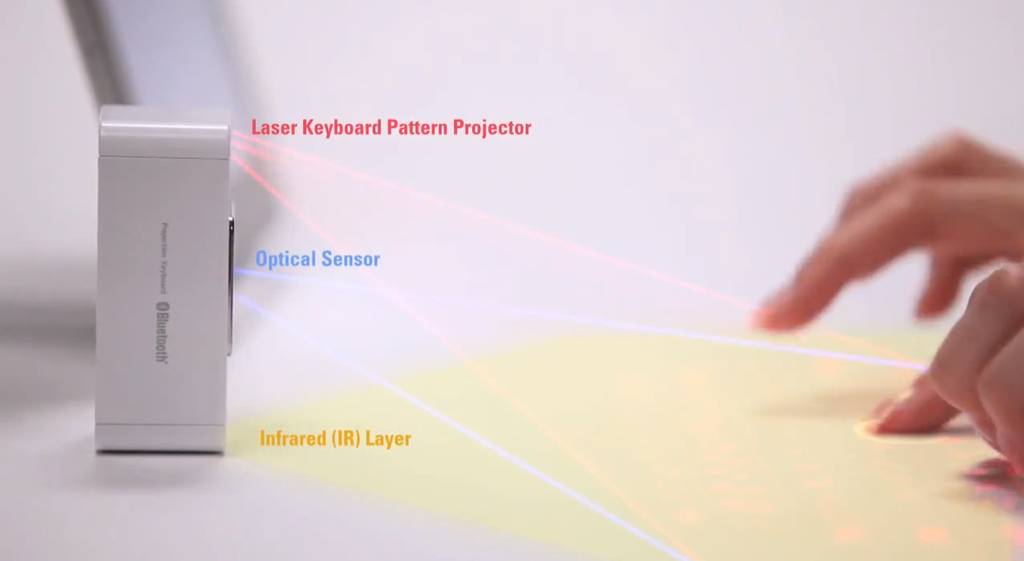 Seth Weintraud who runs 9to5 sites had a chance to try the gizmo firsthand at CES, here’s what he found out:

For me, it was immediately accurate. As you can see in the video above it just works. I only mis-typed one character out of about 100 words typed and it felt like I could really get used to this type of system. That’s something I never thought possible before this initial try.

The web site’s Jordan Kahn recorded his own demo, though it doesn’t do full justice to its capabilities because “our camera didn’t pick up the red keyboard very well”.

The Magic Cube works with Macs and iOS devices running iOS4 and later, Android 2.0 or later, Windows XP or later or any Bluetooth HID device for that matter.

In addition to the Magic Cube itself, Celluon also sells an iPhone case version of the Cube. The Magic Cube retails for $149.99, comes in four colors (silver, red, white, black) and can be picked up over at the Celluon web store.

To startups looking for the next big story in portable accessories: take a closer look at this student’s invisible virtual keyboard which taps the iPhone’s accelerometer sensor to measure the strength and frequency of the microscopic vibrations occuring when “typing” on a surrounding surface area.

The future is now.