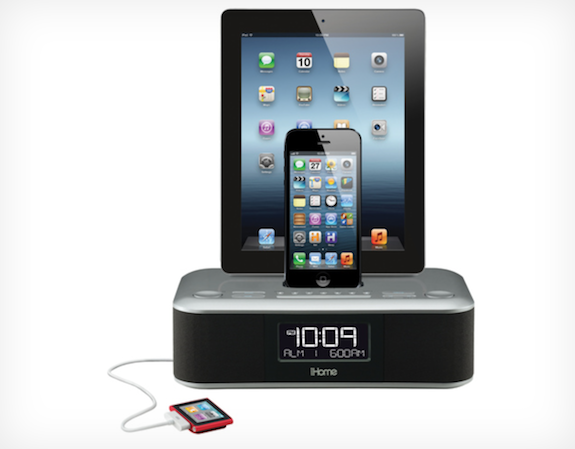 As most of you know, iDB will be at The Consumer Electronics Show in Las Vegas next week. And though Apple itself won’t be there, there will be tons of iOS-flavored products and peripherals worth reading about. Take these new Lightning-compatible audio docks from iHome, for example…

The folks at iHome, one of the most recognized names in iOS accessories, announced this week that they will be debuting a new line of audio docks at CES that will be compatible with Apple’s new Lightning port. This means they’ll work with the new iPods, the iPhone 5, iPad 4 and new iPad mini.

From iHome’s press release (via The Verge):

Apple has taken a lot of criticism over its decision to switch the long-running 30-pin dock connector with the new Lightning plug. Not only did it instantly render millions of accessories useless, but there was a period of time where there weren’t any, or very few, compatible accessories available.

Of course, that’s not the case anymore. We’ve seen dozens of Lightning-enabled accessories hit the market in the last month or so from Belkin, Bose and others. Unfortunately, though, Apple’s strict licensing guidelines for the new port are still keeping many third-party products at bay.

In addition to its two new Lightning docks, iHome also plans to unveil two new Bluetooth speakers, as well as new Bluetooth headphones. And we’re expecting similar announcements from other high-profile accessory-makers next week, so make sure you join us for all of the fun and excitement.