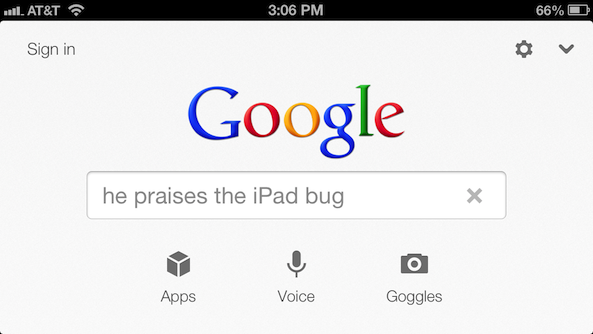 The rivalry between Apple and Google is arguably one of the biggest in the tech world, maybe even the world in general. The two companies are constantly fighting each other for smartphone and tablet marketshare, and they both have legions of loyal fans.

That’s what makes this next story so amusing. A new bug has been discovered in the Google Now and Translate apps that show Apple a bit more love than you’d expect from a rival. Enter the right queries, and both apps will, oddly enough, “praise the iPad.”

So here’s the deal. Something is up with Google’s text-to-speech engine that’s causing Google Now and Google Translate to insert the phrase “he now praises the iPad” at the end of queries that end with phrases like “end with,” “enraged with,” or “filled with.”

The bug has actually been around for a while — it was spotted in Android forums back in October of last year, but it was recently brought to light by the folks over Hacker News. And needless to say, it’s been spreading like wildfire around the Apple blogosphere.

To try it out for yourself, simply launch Google Translate, either on your desktop or via the iOS app, and initiate a translation. Make sure both input and output languages are set to English (it may work with others) and that your sends ends with “end with.”

Obviously, on the screen you’ll just see a duplication of your original text. But if you tap the speaker icon, which activates the text-to-speech function, a voice will say the line. Not working? Try the phrase “Kevin walks at the end with.” It’s been 100% for me.

In the end, yes, it’s really just a stupid little bug that Google will end up patching. But on this rainy Saturday afternoon in Portland, it’s provided me with some paltry entertainment.