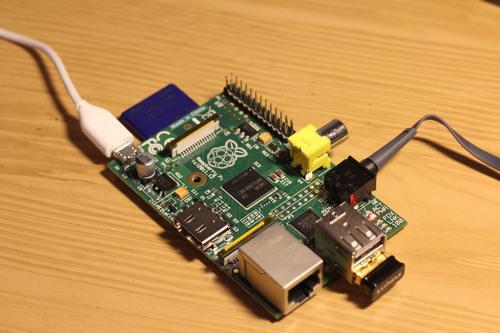 If you’re not familiar with the Raspberry Pi, it’s a mini computer which packs in a 700 MHz ARM 11 processor with 128MB of RAM that runs Debian Linux. In addition, a proof-of-concept hack turns the gizmo into an HDMI-enabled AirPlay video receiving machine. It’s so small you’ll almost forget it’s there and costs only $25.

That’s $75 cheaper than an Apple TV set-top box, the only official solution that provides wireless media streaming functionality from Mountain Lion Macs and iOS devices to a TV set.

Oliver told you in January that one of the Raspberry Pi developers had successfully created a hack that let him stream video from his iPad to a TV via the credit card-sized computer. And now, Cambridge engineering student Jordan Burgess has successfully converted the device into a wireless AirPlay-enabled audio receiver…

Writing on his blog, Jordan explains that it is possible to convert a Raspberry Pi into an AirPlay Wi-Fi audio receiver akin to Apple’s $99 AirPort Express wireless base station (or the $99 Apple TV set-top box).

Faking AirPlay audio compatibility can be accomplished with a little bit of open source trickery, an SD card, micro USB cable and a USB wireless adapter. Basic Terminal knowledge is required as you’ll be installing a copy of Debian Linux OS onto the device.

Some limitations apply due to the $25 build for the Raspberry Pi, meaning they skimped out on certain features.

For starters, the tiny computer is powered by USB cable so additional loads such as a Wi-Fi adapter or a USB keyboard can strain its power supply past its limits.

“I had several instances of odd performance or non-responsiveness due to this”, he warns.

You will also get some background noise and distortion when plugging the computer into your speaker’s 3.5mm port because the Raspberry Pi itself doesn’t have a decent digital-to-analog converter.

A USB soundcard can apparently solve these issues. I have a pair of USB powered Logitech Z120 speakers which I hope to try this out with this soon and I’ll update this when I do.

Still, at an estimated build cost of around £30, or about $48, this hack adds wireless AirPlay audio receiving features to your existing home theater system without breaking the bank. Plus, it’s no doubt a much affordable solution than AirPlay-enabled speakers that usually command a non-neglectable premium.

And if you’re planning to run wireless audio through the entire house, this could be the way to go.

If you’re interested to learn more, Jordan has full instructions on his blog (via TechCrunch).