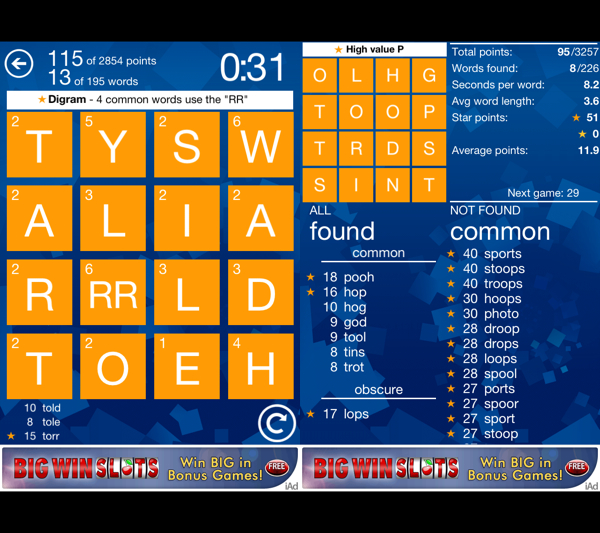 Good news Xbox users, there’s finally a way for you to pad your Live stats from your iPhone or iPad. Microsoft has just released its popular Wordament word game, which has been on Windows Phone for a while now, for iOS, and it has full Xbox Live integration with friends lists and achievements.

For those not familiar with it, Wordament is a highly addictive word game. Players get two minutes to find the most words in a 4×4 grid of letters, competing in real-time, on the same board, against everyone else currently playing. Each board is unique and bonuses are given for longer words…

Microsoft describes the iOS version of the game as “pure Wordament,” meaning it connects to the same servers and plays with the same players that are on Windows Phone and Windows 8. Everyone plays together in one continuous world-wide tournament in 12 puzzle languages across all devices.

Wordament also features Xbox Live integration. Once you’re signed into your Live account, you can earn up to 50 Gamerscore from 10 achievements, and you’ll have access to all of your Xbox Friends and Wordament Frenemies. And if you’ve played the game before, all of your data carries over.

I hadn’t played Wordament until I tried out the new iOS version today. But it’s every bit as addicting as they say. I played 5 rounds or so before I was able to pry myself away to finish this post. The app could use some work though — strangely it doesn’t support the iPhone 5’s 4-inch display, and the ads are annoying.

At any rate, if you want to try the game out for yourself, you can find it in the App Store for free.

Have you had the chance to try Wordament yet?