Nielsen, a highly regarded information and measurement firm, released its “Digital Tops of 2012” lists yesterday, which included topics like the top 10 Internet brands, and the top 10 iOS apps for the year.

The apps were picked based on average unique users from Q1 of 2012 to Q3, and as you might have guessed, four of the top 10 chosen are (were) native iOS apps like Maps and YouTube. We’ve got the full list after the fold… 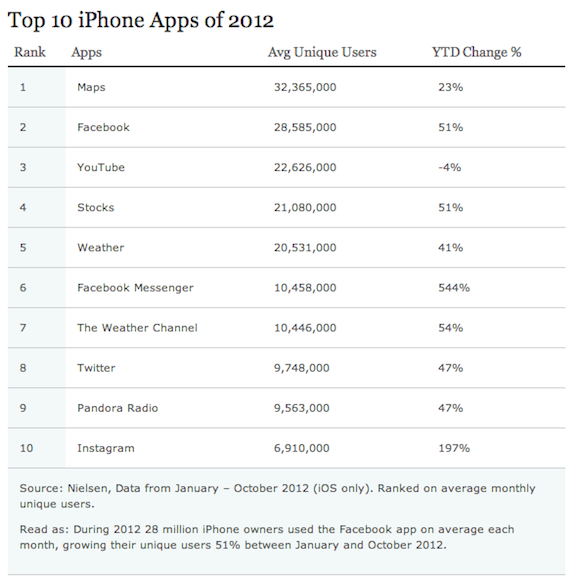 As MacRumors points out, the Maps app here is likely the built-in Google Maps app from iOS 5. This data was pulled from Q1-Q3 of this year, before Apple’s Maps really landed. Still, it highlights the importance of the app.

Facebook’s placement wasn’t much of a surprise — the social network has around a billion users, neither was YouTube or Instagram. Facebook Messenger is interesting though, considering how many popular messaging apps there are.

Nielsen also found that Android still leads in smartphone marketshare by a wide margin, with 52%, and iOS at 35%. Blackberry OS came in third at 7%, Windows Phone with 2% and the rest made up the remaining 5%.

Overall, most of Nielsen’s findings seem pretty in line with the trends we’ve been seeing throughout the year. Were there any apps in the top 10 list that surprised you? Sound off in the comments section below.