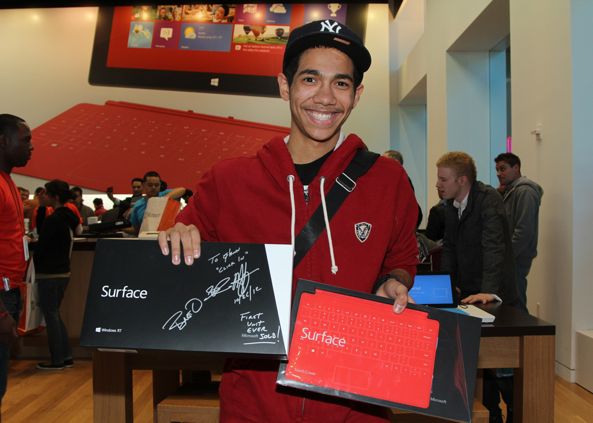 Microsoft’s Surface tablet just isn’t selling. But the company knows – or thinks it does – the reason. The problem with sales is that the Surface just isn’t available in enough stores, the software giant turned tablet maker says. Currently, the Surface is mainly sold in about three dozen Microsoft’s own retail outlets in the country.

After being stung by reports that its tablet wasn’t even selling in Microsoft-owned stores (are you reading this, Oprah Winfrey?), the company announced it will put the Surface on the shelves of third-party retailers, such as Staples. If ‘build it and they will come’ isn’t working, will ‘stock it and they will buy’ be any better?

We’ve increased production and are expanding the ways in which customers can interact with, experience and purchase Surface.

Since its’s October launch, the Surface has been sold only in Microsoft stores in North American and online in Australia and Europe. Panay did not say specify how much production has increased or what retailers would get the tablet.

Staples announced it would begin selling the Surface RT Wednesday. AllThingsD reports that the device is also coming to Best Buy stores.

PC makers, already in a sales downward spiral, may not look forward to the Windows maker hawking its tablet next to a Dell, HP or Lenovo laptop.

As AllThingsD noted, Microsoft announced the decision came after “interest from retailers” and that stores have an option whether or not to stock the tablet. In other words, retailers want the Surface and Microsoft isn’t trying to strong-arm shelf-space for the Surface.

Last week, the Boston-based financial firm Detwiler Fenton said lack of US distribution was “killing the product,” predicting 500,000 to 600,000 Surfaces would sell by Christmas – a far cry from the 1 million to 2 million early expected.

Earlier this week, a report said Microsoft had less than one percent of the web usage share on tablets.

Even with Staples and Best Buy, can Microsoft claim the Surface remains a potential “iPad killer”?

Despite the expanded retailing, the product placements and a plethora of commercials, the Surface is far from challenging the iPad’s leading status.

Throw in the fact that the Surface RT won’t run legacy Windows applications (a compatible Surface is expected in January) and the product may wind up being yet another pothole in the long road of failed tablet attempts.

Which isn’t saying the Surface isn’t a fine tablet…