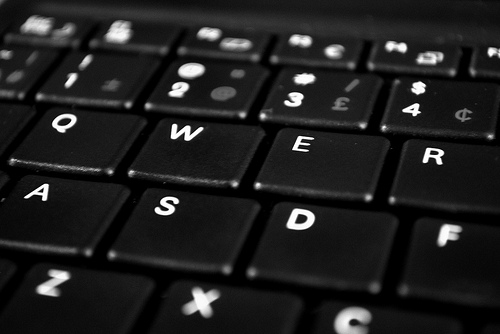 Memo to PC makers: Your best days are over. That’s the word from one Wall Street observer who says tablets such as Apple’s iPad are reducing the need to regularly replace laptops and other computers. Indeed, the PC replacement cycle relied upon by computer makers will be one to two years longer, resulting in a loss of 50 million to 100 million PCs shipped annually, by 2015. By contrast, tablet sales are expected to skyrocket from 182 million in 2013 to 300 million by 2016 – with Apple the major beneficiary…

“We believe that Apple will continue to gain share and be one of the main beneficiaries of the market move toward mobile devices”, Barclay Capital’s hardware guru Ben Reitzes told investors Tuesday (via AllThingsD).

Despite pressure from Amazon and Google, as well as rising costs impacting its margins, “Apple should still generate a disproportionate share of the profits in computing over the long-term”, the analyst forecasts.

The downward spiral of PC sales began as consumers and enterprises moved more to mobile devices and cloud storage, increasing what Reitzes terms “significant ‘task infringement'”. In other words, people discovered tablets and the cloud could accomplish jobs once only possible with PCs.

“After years of denial, most PC industry players still don’t seem to realize what is happening – and don’t have contingency plans”, Reitzes writes.

Um believes PC shipments during 2012 will slip into negative growth, sinking to -2.4 percent from 0 percent. Additionally, he cut in half his growth prediction for 2013 to 2.3 percent, down from 5.8 percent.

The key reasons: consumers are choosing Apple’s iPad and netbooks expected to spark demand for PCs are “too high to drive the replacement cycle until mid/late 2013, at the earliest.”

Apple CEO Tim Cook during the iPad mini introduction made a point saying the company sold more iPads during the second quarter than any individual vendor’s PC shipments. 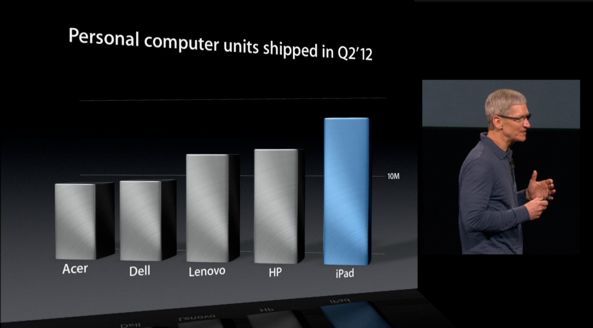 By comparison, Apple profit slipped by just three percent, but its share of PC profits grew to 57 percent from last quarter’s 52 percent, the analyst told investors. This while controlling less that six percent of the PCs sold.

Although notebook PCs are often high on the list for holiday sales, this year is different. Notebook shipments were below normal in October and will likely see only eight percent growth during the fiscal fourth quarter instead of the decade average of 13.5 percent.

Um sees this due to a “consumer wallet share shift to Apple during the holidays given a new product portfolio” which includes the iPhone 5, iPad mini and 4th generation iPad. To make up for the spending shift, PC manufacturers will likely increase promotions. 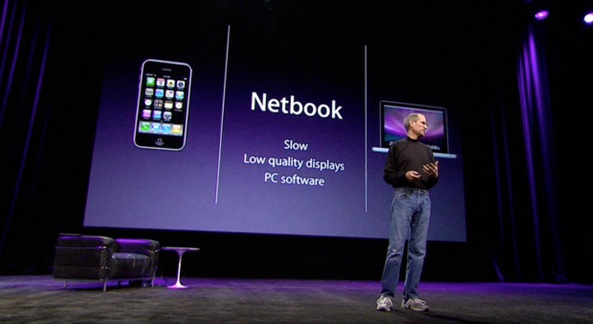 These analyst reports only confirm what has been happening for some time now. The entire computing industry has shifted toward mobility, with tablets leading the way. To compete, PC makers have only tried to make their desktop and laptop machines more  tablet-like, rather than redefine the PC market with features and productivity which cannot be accomplished elsewhere.

Instead of reshaping the PC for a new computing market, manufacturers instead produce second-rate imitations of tablets. Reitzes hits the nail on the head when he writes that PC makers have long been in denial and have no contingency for competing in a new environment.

Can PCs make a come-back?

If you were in charge, how would you market a successful PC company to compete against Apple?