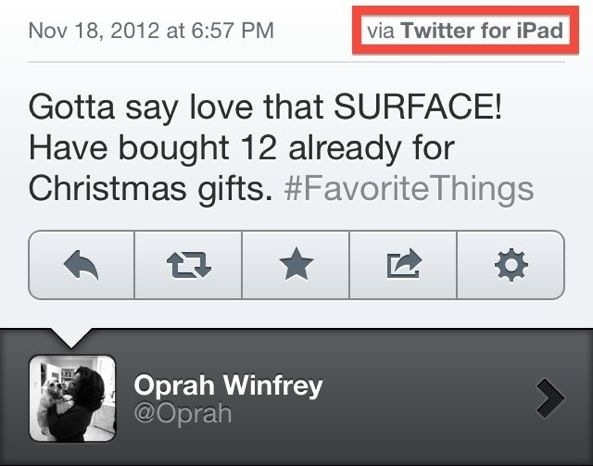 Billions of marketing dollars can’t hide the obvious disconnect and lack of creativity plaguing Microsoft’s PR department. Windows Phone commercials are boring as hell, annoying, heavy on celebs and short on imagination. And now comes this. Oprah tweeting her love for the Surface this morning isn’t out of character: she’s well-known for endorsing stuff.

It reads: “Gotta say love that SURFACE! Have bought 12 already for Christmas gifts. #FavoriteThings”. She unfortunately sent that tweet, which Microsoft’s Corporate Communications immediately retweeted, from her iPad.

I know Oprah hosts regular giveaways of favorite products, but boy did that stupid PR stunt backfire. Besides, she previously professed her love for Apple’s tablet to the whole world. This is nothing if not way too clueless marketing on Microsoft’s part. Speaking of clueless…

And this is Oprah in 2010 calling the iPad her favorite thing ever.

To her credit, she did put the Surface on her list of “Favorite Things” for 2012 and said Microsoft’s tablet “felt like a Mercedes-Benz to me”.

My formed boss nailed it.

I wonder how much extra it would have cost Microsoft to have Oprah actually use the Surface? Clearly out of budget. — Seth Weintraub (@llsethj) November 19, 2012

In additional tweets, Oprah opines that picture seems sharper on Microsoft’s tablet and says that “keyboard is easier for me on Surface”.

I guess she didn’t get the memo.

@bmartin2011 also keyboard easier for me on Surface. #FavoriteThings

And speaking of clueless, the title of the ‘Most Moronic PR Stunt of the Day’ goes to RIM CEO who ‘leaked’ a BlackBerry 10 device. 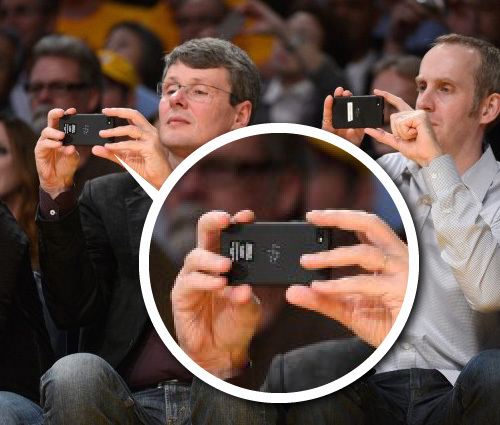 Too bad it looks awfully staged.

Is there anything we can learn from today?

You should never take shopping advice from celebrities!

Note: I could be in a whining mood today because I skimped on my dose of awesomesauce.