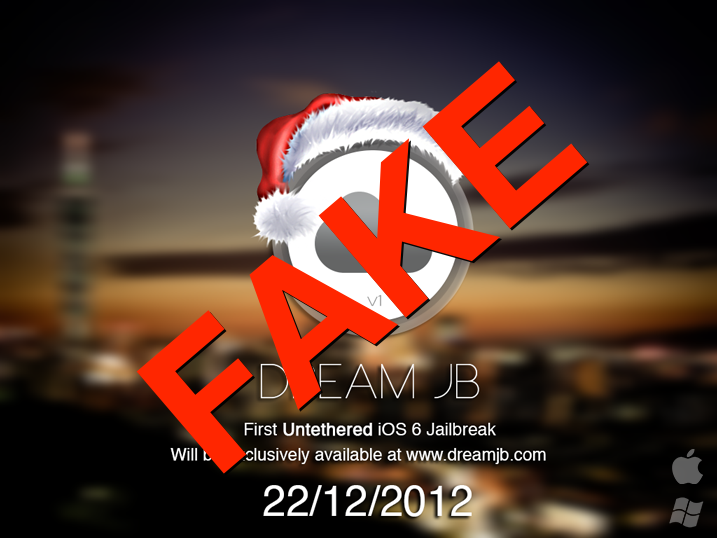 Yesterday I called out the developer of “Dream JB” for promising to bring a jailbreak to the iPhone 5 when he knew good and well that he couldn’t fulfill that promise.

Understandably, a lot of readers were miffed that I had the audacity to dash their hopes for a jailbreak. We’ve waited a long time for a jailbreak for iOS 6 and the iPhone 5, so it didn’t really surprise me when I was labeled a pessimist, although I was surprised a bit that my journalistic integrity was questioned. Fair enough, I was pretty positive that in due time this “jailbreak” would be exposed for what it really was.

As I stated, I too wish for a jailbreak, it’s in my best interest to have one…but I and many others saw through this for what it was — a fake. Now the developer has released a video showcasing his fake work. And although it’s a pretty ambitious job of fakery, at the end of the day it’s still fake.

The video above outlines just a handful of obvious discrepancies that the developer — and I do use that term loosely — failed to address before composing his video. Notice I didn’t say shooting his video, because this was obviously a staged composition.

At this point I’m finding it hard to figure out the person’s motivation behind this. I guess you could say that they did it for the Twitter followers, but what does 20k Twitter followers get you these days?

Maybe he did it just to be a troll, the more likely scenario. Or, perhaps he just wanted to watch and laugh as he preyed on the wants of many people anxious for a jailbreak for their device.

Whatever the case may be, I’m sorry to be the bearer of bad news.

This isn’t a post to say “I told you so” after being lambasted yesterday by many readers. On the contrary, my hope is that this will prevent the next person from gaining as much ground with publicity and Twitter followers as this guy did.

There are plenty of hardworking folks within this community that get probably 1/20 of the recognition that this guy got, and all he produced was a fake video. It’s not fair that he gets so much attention when he has absolutely no credibility, and any credibility he did have is quickly plummeting faster than you can blink an eye.

Now he says that to clear everything up that he will have to release the Dream JB tonight. So you’re telling me that he had an estimated 10 days of work remaining, and he somehow miraculously got it done within a few hours? He’s likely “releasing” his work before his original date because everyone will know it’s a fake by the time his original date rolls around. At least now he might catch a few uniformed stragglers off guard with his shenanigans. That leads me to believe that it might be something malicious like a virus, but we can’t be too sure.

This is the last post that I’ll post about this so-called jailbreak. Really, I’m just as guilty as anyone else for giving this any attention in the first place. My entire goal was to keep you guys informed about what was going on, and to nullify any false hopes regarding an iPhone 5 jailbreak. Sadly that backfired on me, but I hope that from this point forward we’ll all learn from this and become, not pessimistic, but a bit more skeptical in judging the motivations of others in this community.

Update: Okay, so nothing malicious was posted. Just a good old fashioned RickRoll. There ya go, folks.