When the town of Mildura was showing up inside iOS Maps in the middle of Australia’s Murray Sunset National Park, users were quick to point out that Apple’s data was 43 miles off the town’s actual location. It was already too late: the police issued a public warning as some iPhone-totting travelers had gotten lost in the Park’s maze-like roadways. That the area has poor cell reception and lacks water supply didn’t help either.

Apple has corrected the problem since and now we’ve learned that particular snafu wasn’t Apple’s fault in the first place: the company simply re-used the data supplied by the state of Victoria…

The Register has the story:

The Australian Gazetteer – the authoritative list of 300,000-plus placenames, complete with coordinates – includes two Milduras. One is the “real” town, the other is an entry for “Mildura Rural City”, coordinates -34.79724 141.76108. It’s this second entry that points to the middle of the Murray-Sunset National Park, just near a spot called Rocket Lake.

The Gazetteer is run by the Geosciences Australia agency which uses official mapping data provided by the state of Victoria. 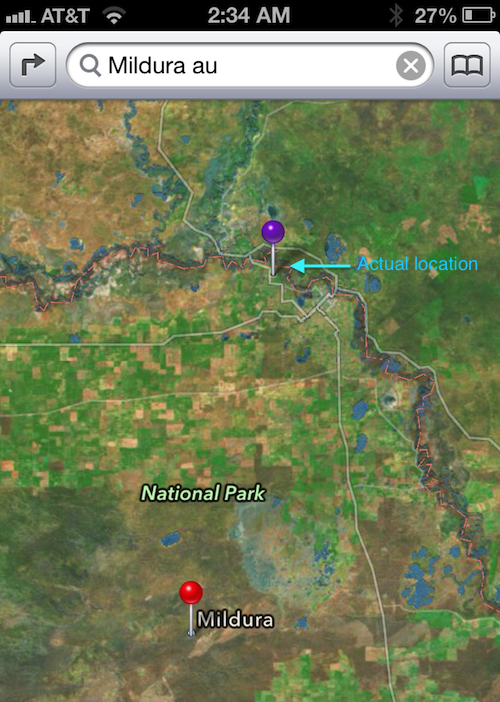 The non-scandal also raises the question of how on Earth could the state of Victoria mix up its own cities. If you ask me, an example like this teaches us that maps are tough.

Of course, it would have been better if Apple’s Maps team had spotted incorrect data before shit hit the fan, though the company should be credited for moving quickly to fix the entry.

That in and of itself should be an encouraging sign, no?