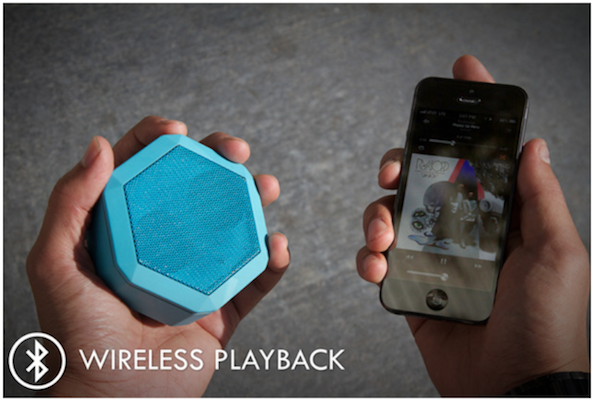 When it comes to iPhone-friendly speakers, there’s no shortage of choices. There’s the Jawbone Jambox, the Beats Pill, and countless other options. But when it comes to durable speakers that you can take with you anywhere, the choices are a lot more limited.

In fact, you might even say there’s a gap in the market for such a product. And the Boombot REX ultraportable speaker is hoping to fill that gap…

Boombotix describes its new Boombot Rex speaker as a combination of ruggedized industrial design and ground-breaking audio engineering. It’s essentially a 3-inch Bluetooth speaker and microphone that has been built to withstand the elements.

On the durability front, the Rex has a ruggedized, high-impact ABS shell and its circuit board is secured to the internal frame in four locations. It’s also certified IP53 water-resistant, and the developers say it will survive in both the rain and the snow.

As far as features go, the speaker has dual 36-millimeter full-range drivers and a MASSIVE Bass Woofer. It also has audio in and out ports, a built-in belt clip, and a rechargeable lithium-ion battery that should be good for something like 6 hours of jamming.

But one of the things that makes the Boombot Rex so special is its Siri integration. It’s microphone can be used for phone calls, or for calling up Apple’s digitial assistant, and she’ll even respond through the speaker. Apparently the Rex is the first to do this.

Ok, now that you know all about the Boombot speaker, you’re probably wondering how much it costs. Well, right now you can get one for $75 via Kickstarter. The project has 35 days left and it’s already reached its funding goal, so at this point it’s just a preorder.

Honestly, this is a really good idea. I can imagine a number of scenarios where a small, durable bluetooth speaker like this would come in handy. And if it sounds half as good as they say it does, I think Boombotix is going to have a major hit on its hands.

What do you think about the Boombot Rex?