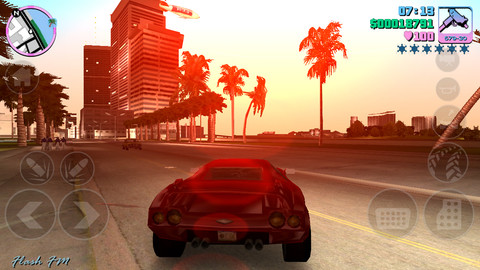 Here it is folks, the moment you’ve all been waiting for. Rockstar’s Grand Theft Auto: Vice City iOS port is now available in the App Store. That means that the 1980’s, and all of its big hair, oversized sunglasses and pastel suits, are now just a tap away.

Rockstar has been leading up to this moment for over a month now, announcing back in October that it would be releasing an iOS version of its popular PS2 GTA title. And from what we’ve seen, it looks and sounds every bit as good as the original…

The game certainly looks good, with updated graphics, character models and lighting effects, and native support for Retina devices. And with its new tailored firing and targeting options, and a massive campaign mode, it has the gameplay to back it up.

Other cool features for GTA: Vice City include iCloud save game support, and customizable game controls that can be tweaked and laid out how you want them. It even supports custom iTunes playlists, just in case you get tired of the synthesized soundtrack.

If you’re interested in checking out the new Grand Theft Auto, you can find it in the App Store (or Google Play Store for you Android users) for $4.99. It’s universal, so it will play on both your iPhone and your iPad, as well as your iPod touch.

Have you tried GTA: Vice City yet? Thoughts?