Apple’s iMessage was first introduced at WWDC 2011 and billed as a data-driven communications service for exchange of chat messages, images, contact cards, locations and more between iPhones, iPods and iPads. iMessage also replaced the old iChat client with the OS X Mountain Lion update, enabling Mac owners to interact with other Mac and iOS users simply by using their email handle or cell phone number. Apple originally filed for an iMessage trademark in September 2011 and today the US Patent and Trademark Office (USPTO) granted the Cupertino firm two registered trademarks for iMessage, in addiction to another one for the Passbook icon…

Patently Apple passes along a note that the United State Patent and Trademark Office (USPTO) today granted Apple two Registered Trademarks for iMessage, both of which were originally filed for in September 2011.

The ‘502 is for “communication services, namely, transmission of text, data, images, and video by wireless communication networks and the Internet; electronic messaging and wireless digital messaging services”.

Here’s the certificate itself, courtesy of USPTO. 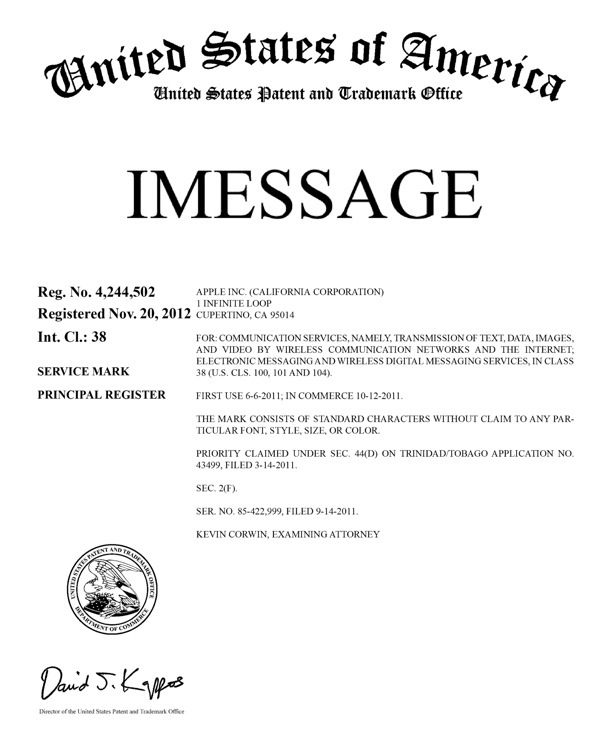 As for the Passbook app icon trademark, it’s published under the serial number 85781832.

As you know, Passbook is a new iPhone and iPod touch app in iOS 6 conceived as a central repository for various coupons, tickets, boarding passes, loyalty cards and so forth.

This is in line what Apple’s SVP of Worldwide Marketing Phil Schiller recently said, that Passbook is not a direct payment solution.

The Passbook certificate notes the applicant (Apple) first used the app icon “as early as 06/11/2012”, or when it announced the feature at WWDC. The trademark was first used in commerce as early as September 19, the certificate reads, or the day iOS 6 launched for public consumption.