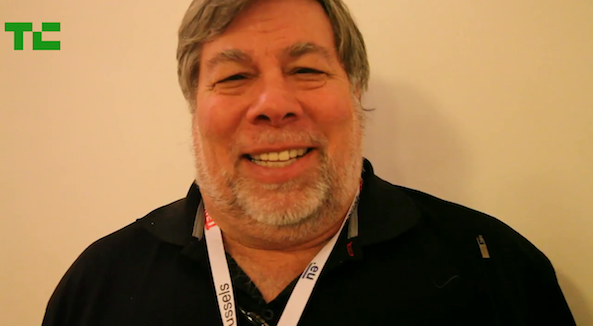 When he’s not co-starring in video games, Steve Wozniak is known for being an outspoken gadget-lover. Of course, one of his favorite subjects is Apple. And despite his affiliation with the company, he never seems to hold back his criticisms.

This proved true once again during a recent interview with the Woz at a TED event in Belgium. The Apple co-founder told TechCrunch that he’s worried that Microsoft has surpassed the fruit company in innovation over the past few years…

During the interview, TechCrunch’s Andrew Keen asked Woz if he felt that Microsoft was now more innovative than Apple. Here’s his response:

“I fear that Microsoft might have been sitting in their labs, trying to innovate, with a formula. “How do we come up with new ideas? Let’s not keep doing the same things as before, just the newer versions of them.” They might have been doing that for three years, while Apple was just used to cranking out the newest iPhone and falling a little behind. And that worries me greatly.”

Mr. Wozniak isn’t the only one who thinks that Apple has gotten a little stale over the years. The company is often criticized for releasing handsets and tablets that look too much like their predecessors — even with the recent iPhone 5, which was technically a large departure from the 4S.

He’s also not the only one who thinks that Microsoft is doing some big things in the mobile space. The Windows Phone platform has received a lot of critical acclaim for looking and acting completely different than the iOS and Android platforms, though it has yet to resonate with consumers.

And I have to agree here. I’m not in love with it yet, but I have a tremendous amount of respect for Microsoft and its efforts with Windows Phone. It’s completely original, and I love the live tiles concept. Heck, even on the hardware front, with the Surface, Microsoft is trying to do something different.

But different doesn’t always translate into dollar signs, which is what I think is keeping Apple from trying anything new. A large amount of its revenue depends on iOS device sales, and it doesn’t want to mess with its proven formula. It better be careful though, that’s what got the old Apple into trouble.

What do you think, is Microsoft out-innovating Apple right now?