In another edition of our long-running ‘quit your worrying’ series, we present why the iPad mini won’t take a bite from larger Apple tablet sales. You may recall, when the smaller iPad was introduced, experts offered wide-ranging estimates on how many sales the 7.9-inch tablet would cost the original iPad. A new survey suggests the number of cannibalized iPad sales will be very, very small. More than half of people who intend to purchase an iPad mini within the next 18 months have never owned a tablet, according to a survey conducted before Apple’s new device hit stores.

Of that group, roughly 17 percent said the mini would replace another device, according to the Cowen and Co. numbers. Of the portion of people intending the mini as a replacement, 29 percent said it would be the iPad. However, 42 percent of the replacers were targeting their Windows PC…

In other words, the survey indicates most people are buying an iPad mini as their first tablet. Additionally, if the iPad mini is cannibalizing anything, it is Windows-based PCs. Although the survey also found just thirteen percent of those surveyed said they intended to buy the mini to replace Amazon’s Kindle Fire.

With the iPad mini, Apple isn’t wooing consumers who might have otherwise purchased a larger iPad, it’s jacking into an untapped market looking for a smaller version.

First, of those planning to buy the iPad mini to replace another device, fewer chose the Kindle Fire (thirteen percent) compared to the larger iPad (29 percent) as what they plan to ditch. 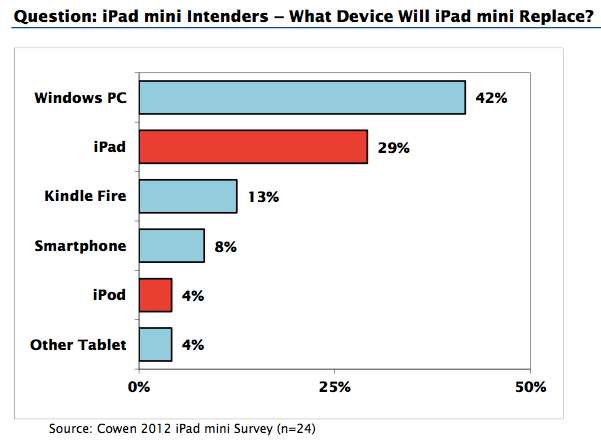 A clue might be in the 42 percent who’ll replace their Windows PC with the mini.

Perhaps the iPad mini is viewed more as a PC alternative. The Kindle Fire, while offering some tablet-like functionality, may be viewed by consumers as more of a reading device, rather than a full-blown tablet.

Is the iPad mini more of a threat to PCs than the Kindle Fire?