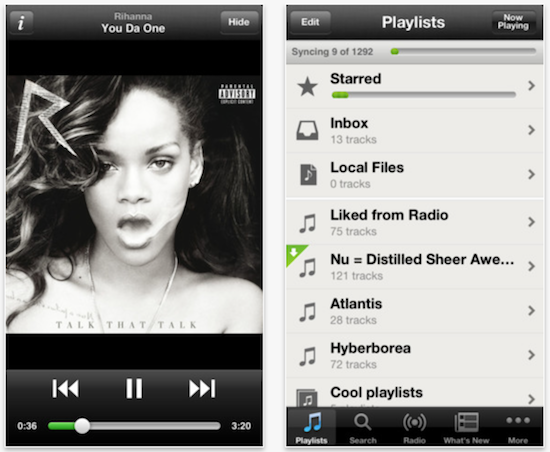 Spotify users rejoice, the cloud-based music service has finally pushed out an update to its iOS app that makes it compatible with the iPhone 5’s new 4-inch display. The company has taken a lot of heat from its subscribers over the past several weeks, as it was the last out of the big three music-streamers (Pandora and Rdio) to optimize its app for Apple’s new handset…

The minor update just brings the app to version 0.5.8, and it appears that iPhone 5 compatibility is the only change here. But it’s a long overdue, and welcomed change, as some Spotify users have actually threatened to leave the service due to lack of iPhone 5 support.

For those unfamiliar with the platform, it’s very similar to Pandora. Folks (inside the US only) can enjoy free customizable streaming radio stations with ads, or they can pay a monthly fee to get unlimited ad-free playback and of Spotify’s entire digital music collection.

At any rate, if you’re a Spotify user with an iPhone 5, or an iPhone 5 user looking for a good music app, you can find Spotify  in the App Store, for free. If you already have the app, and aren’t seeing the update yet, do a search for it in the App Store. This worked for me.