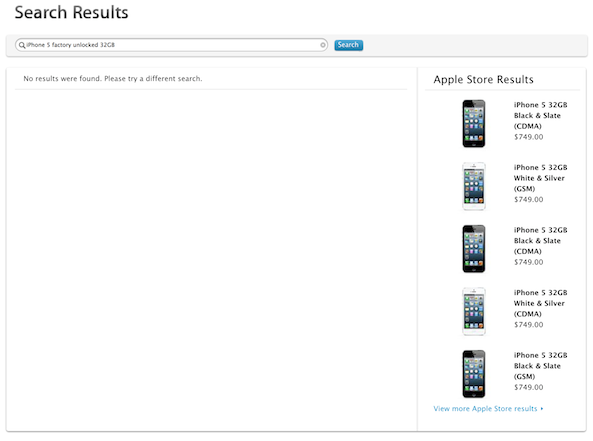 While Apple offers unlocked iPhone 5s in Canada and other countries, it has yet to give buyers inside the US that option. So unless you go through a third party vendor, you can’t get an unlocked iPhone 5 here in the States.

That could be changing in the near future though. Purported prices for unlocked versions of the new handset have been discovered hidden on Apple’s US website, which could mean that they’re preparing to roll them out…

“While not listed anywhere else on the site, a query for “iPhone 5 factory unlocked” in the Apple.com search bar reveals “Apple Store Results” as seen above. The units are priced at $649 for the 16GB version, $749 for the 32GB model, and $849 for the 64GB iteration.”

Though not shown in the above screenshot, all prices for both GSM and CDMA models can be found this way by adding the storage size. So searching for “iPhone 5 factory unlocked 32GB” will return results for both models.

It’s unknown how long these search results have been on Apple’s website, so there’s no way to know when or if we’ll see unlocked iPhone 5s in the US. Last year, though, Apple started selling unlocked 4S models on November 11.

It’s also worth noting that back in September, we discovered that the Verizon version of the iPhone 5 comes with an unlocked SIM card slot, meaning it will work on GSM networks. Something to keep in mind if you’re in the market.