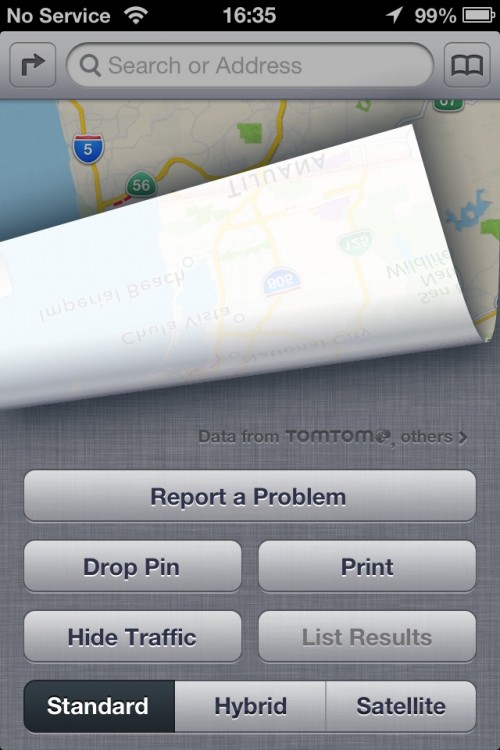 And, as a reader has pointed out to us, iOS 6.1 also adds a new “Report a Problem” button to the stock Maps app. It replaces a smaller bug reporter link, and signifies Apple’s commitment to making Maps better…

Apple Maps has easily been one of the company’s biggest debacles in recent memory. Initially, people were excited when Scott Forstall announced this summer that Apple would be replacing the dated Google Maps app in iOS 6 with its own creation, complete with 3D buildings and spoken turn-by-turn directions.

But that excitement quickly faded as Apple seeded beta after beta of iOS 6 with a subpar Maps application that had missing location data and inaccurate directions. And it turned to anger when the company released the new software to the public without fixing any of these serious bugs, causing quite the media fallout.

Apple’s mapping missteps have drawn criticism from customers and competitors, to the point where CEO Tim Cook felt like he had to write a letter of apology to the public. It’s even said to have been a major factor in the recently-announced departure of the aforementioned Scott Forstall, Apple’s SVP of iOS Software.

But things do seem to be getting better. We’ve already noticed several improvements to the Maps app since iOS 6 was released in September, and it appears Apple is looking to build on that with iOS 6.1.

If you’re looking to help speed up the improvement process, we have a guide that shows you how to report a problem in the Maps app. And with this new larger link to the bug filing portal, it just got a whole lot easier.