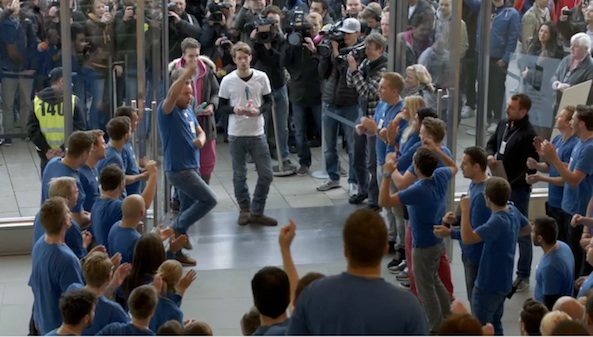 As noted by some of our readers, Apple has quietly posted a new video to its iPhone 5 page entitled “The Launch Day video.” The two-minute compilation clip, as you might have guessed, shows scenes from Apple Stores around the globe during last month’s iPhone 5 launch day events…

You can find the video on Apple’s iPhone 5 page by clicking here, as it’s yet to add it to its YouTube channel. However, several ripped versions have appeared online. So here you go:

It doesn’t look like Apple intended this to be an advertisement, though it would certainly make a great one. It really conveys the type of power Apple and its products have with consumers.

The company has actually been scoffed at over these types of exuberant events, but they seem to be working. Apple sold a record-breaking 5 million iPhone 5s in its opening weekend.

Apple launched the iPhone 5 in 9 countries, and it’s now in more than 30. It plans to add to that on November 2nd, and should have the handset in more than 100 countries by December.

Anyway, what’d you think of the compilation clip?