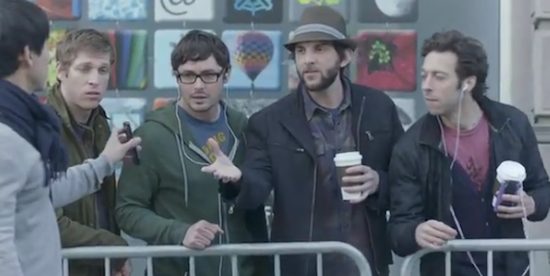 Apple and Samsung have been involved in quite the court battle over the last 6 months. Apple accused Samsung of copying the trademarked design of its products, and since then, the two companies have been in and out of court.

Now it looks like the war is about to spill out into the advertising arena. Although companies have taken shots at Apple’s popular smartphone in commercials before, none of them compare to the Korean manufacturer’s latest TV spot…

The people portrayed in the advert fit the typical “fanboy” stereotype: ignorant, Starbucks-drinking hipsters that will purchase anything Apple spits out. And considering that this is actually how a lot of folks (especially Android fans) perceive iPhone users, the commercial is actually pretty effective.

It’ll be interesting to see if Apple responds to Samsung with its own attack ad, given the bad blood between the two companies. Apple itself is certainly no stranger to advertising bouts. You might recall its long-running “I am a Mac” ad campaign, which constantly poked fun at Windows computers.

What do you think of Samsung’s new TV ad?