Deliveries of orders of the fourth-generation iPad with Retina display have been postponed until one week on the online Apple store. This comes just after shipments of the new iPad mini were delayed two weeks following its arrival to stores last week. Both devices became available for pre-order four days ago. 72 hours later, the initial stock of the 16GB iPad mini was sold out. First, the more popular black model was gone and was quickly followed by iPad mini shortages across the board. Both tablets were introduced at Apple’s October 23 media event…

We received numerous tips last night warning us of the iPad 3 shortages on Apple’s online store. 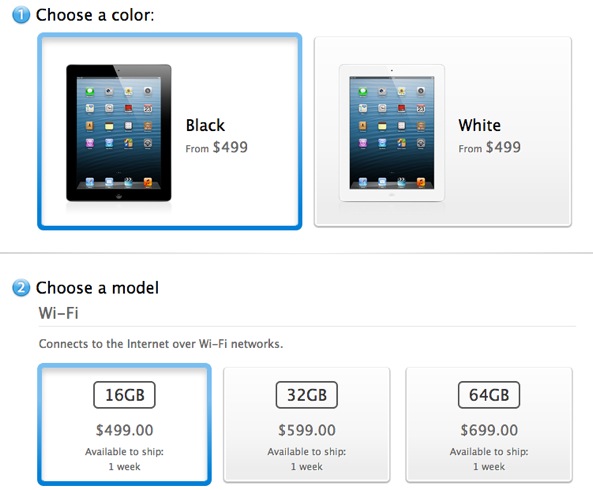 The store continues to show a two-week delivery estimate for all WiFi iPad mini models. Both models are slated to arrive to customers’ hands on Friday, November 2.

This retooled iPad 3 is now being officially called the iPad with Retina display instead of the previous “the new iPad” moniker. It replaces the ‘old’ model introduced earlier this year and continues to sell for $499/$599/$699 for the 16/32/64GB model, with cellular versions commanding an extra $130.

The device contains Apple’s latest A6X chip with twice the CPU and GPU performance, Apple’s new Lightning connector, the latest and greatest WiFi networking along with an improved 4G LTE with greater coverage across the world’s carriers.

The iSight camera on the back remains unchanged versus the previous model, but Apple improved the front-facing module, which now supports FaceTime HD calls in 720p and takes 1.2-megapixel stills.

Did you order your iPad mini or this ‘new’ iPad?