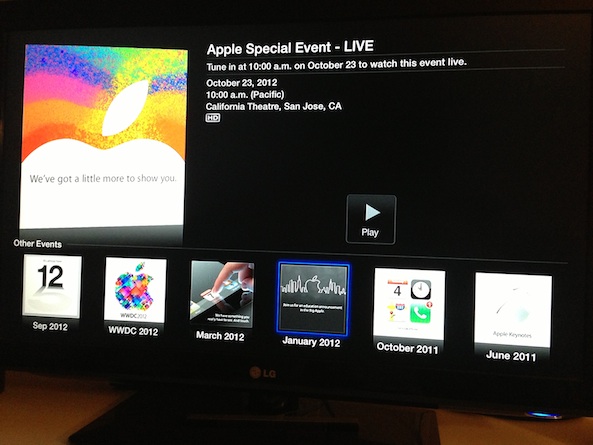 Great news Apple fans, it looks like the Cupertino company has decided to live stream today’s so-called “iPad mini” event after all.

Several users have noticed that a new icon labeled ‘Apple Events’ has popped up on the main menu of the Apple TV that matches the press invitations Apple sent out last week. And sure enough, its description says that there will be a live feed of today’s presser…

As you probably all know by now, Apple is widely expected to unveil a new, smaller tablet at today’s event, as well as new Macs. There has also been talk of a refreshed version of the third gen iPad making an appearance, and possibly a new version of iBooks.

It’s unknown whether or not Apple will also be live-streaming the event on its web site, but don’t worry, we’ll be covering the entire thing here on iDB.