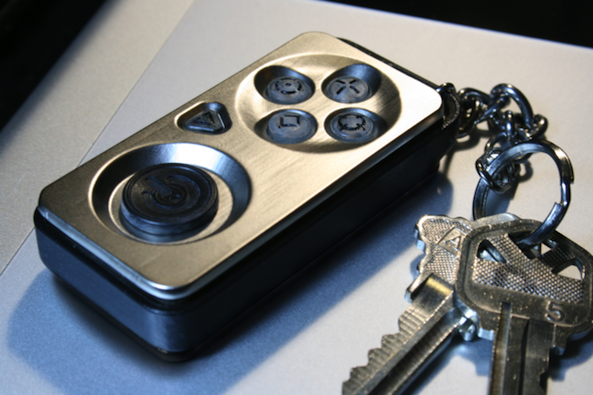 It seems like iOS game controllers are a dime a dozen these days. There’s the iControlPad 2, the iCade 8-Bitty and the Bladepad, to name a few. But we still haven’t seen a single controller pull ahead of the pack.

And that’s a good thing — at least for accessory-makers anyway. It means that the controller market is still anyone’s game. That being said, we’ve got another one to show you today, and it’s called the iMpulse…

The iMpulse is a product of Black Powder Media, and it’s billed as the world’s smallest wireless controller for mobile devices. It’s just 2.7-inches long and 1.3-inches wide, making it small enough to fit on your keychain.

Don’t let its size fool you though, the controller is capable. The battery can handle 10 hours of gameplay, and standby for 30 days. And it uses Bluetooth 2.1, so it can connect to iOS, Android and many other devices.

But the iMpulse controller does more than play games. It also doubles as a key finder, and a remote camera trigger for your iPhone. And Black Powder says that they are also adding in a media remote function.

Unfortunately, all of this means nothing without developer support — remember this is a wireless game controller. And as far as we can tell, the iMpulse is only compatible with a few hundred iOS titles.

Nevertheless, the idea of such a portable controller is enticing. Even more so for $30. If you’re interested, you can pre-order an iMpulse over on its Kickstarter page. The project is well past its $50,000 funding goal.

What are your thoughts on the iMpulse?