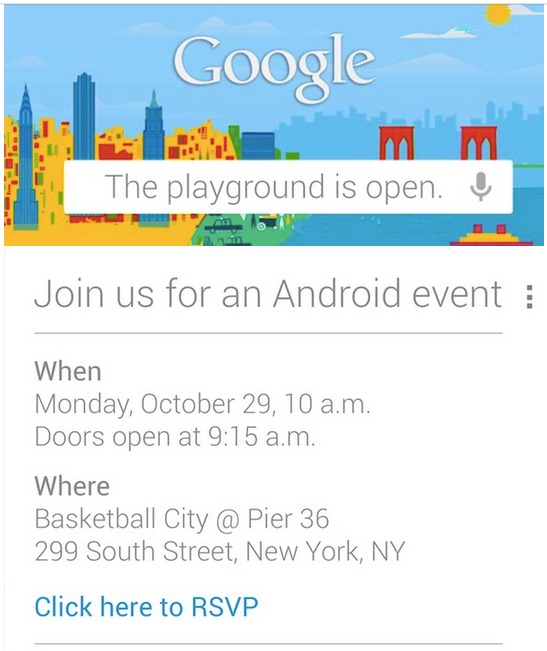 Google has sent out press invitations this afternoon for an Android event to take place on October 29th. The shindig will kick off at 10 a.m. EST at Basketball City in New York.

The invitation itself doesn’t give many clues as to what could be announced. But given the fact that the holidays are just around the corner, we’re guessing it’s new hardware…

On the hardware front, there have been rumors that we’ll see both LG and Sony-flavored Nexus handsets this year. And since last year’s Nexus debuted around this time, it’s not a stretch to think that we’ll see a new one in the not-so-distant future.

The timing of the event is also interesting, as it comes less than a week after Apple’s October 23 event, where it is expected to unveil the iPad mini, and just a few days after Microsoft’s Surface/Windows 8 launch. Talk about a busy week in tech.

Google will be live-streaming the presser on its Android YouTube channel. And as usual we’ll be tuning in and reporting back to you with any and all interesting announcements.

What do you think Google is going to unveil?