If you bought Walter Isaacson’s official Steve Jobs biography, titles from the New York Times bestseller list or other iBooks from Apple (or e-books from other retailers) between April 1, 2010 and May 21, 2012, you may be eligible for your share of the $65 million settlement in the e-book price fixing scandal. Amazon and Apple started emailing customers that the settlement has been reached between the State Attorneys General and book publishers Hachette, HarperCollins and Simon & Schuster.

Though Apple has not been sued in this case, the company is “assisting in providing this notice as a service to its customers”. Companies will compensate eligible customers from $0.30 to $1.32 per e-book as the named publishers already paid $69 million into a settlement fund…

According to an email notice, refunds will be issued as either account credit or as a check and won’t be coming before February 2013, subject to court approval, as Penguin, Macmillan and Apple have yet to agree to this settlement.

Apple previously called the settlement “unlawful” and signalled intentions to move ahead with the trial.

Those pre-qualified needn’t do anything to receive their credit because Apple will reimburse qualified buyers automatically.

If the Court approves the Settlements, you will receive another email letting you know how to activate your credit. Once you activate the credit, it will be applied to your account by Apple.

If you bought electronic books from more than one retailer, you may receive notices with different instructions about whether you will receive a credit or need to file a Claim Form for that retailer. You will have a separate claim for each retailer and you should follow the specific instructions from each one.

Per Amazon, your compensation in form of credits can be used to purchase either digital Kindle books or their dead tree counterparts.

“Alternatively, eligible customers may request a check in the amount of the credit by following the instructions included in the formal notice of the settlements”, the company writes.

In addition to Amazon and Apple, the settlement requires Barnes & Noble, Google, Kobo and Sony to issue similar refunds. In the case of Sony or Google, you’ll have to file a claim form before December 12, 2012 in order to receive a check. 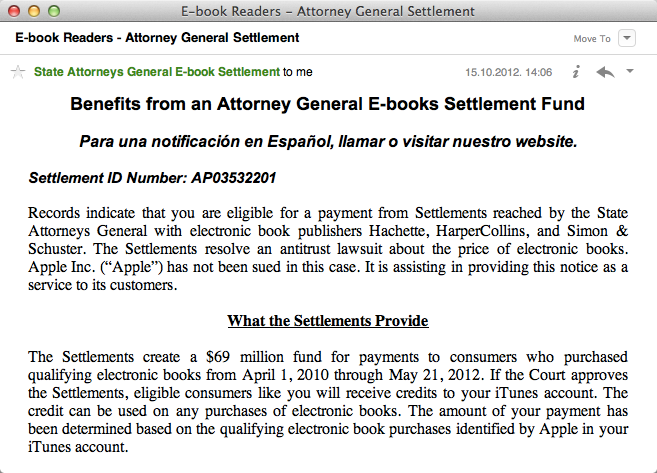 For more information, head over to the official web site for State Attorneys General e-book settlements.

I, of course, did purchase the Steve Jobs bio book direct from Apple and am eligible for a refund on that and a few dozen other tittles I’ve acquired between April 1, 2010 and May 21, 2012.

We’ll continue updating you how this things unfolds so stay tuned and monitor your inbox for email communication from State Attorneys General E-book Settlement (check your spam folder).

If you already have received the email communication from them, feel free to opine down in the comments.