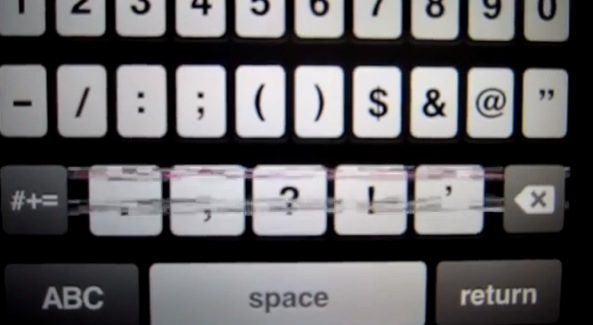 Apparently, it’s randomly inconveniencing an unknown proportion of users whose device exhibits an annoying glitch where some parts of the keyboard show random noise and broken lines, like old TV sets attuned to the snow white frequency…

A growing thread on Apple’s Discussion forums is filling with reports of the screen flickering problem, which by all accounts appears to be related to the software keyboard.

When I enter my password in the app store, lines begin to flicker across rows of the keyboard.

This has happened on my last two visits to the app store. The first two or three times there was no problem. This is the only context in which I observe the flickering keyboard. Is anyone else having this issue?

Another users says the issue is “kind of widely reported in Japan”.

A guy who called Apple’s support department was told that the company will be investigating further.

Apple reportedly replaced devices for some people, which solved the problem for some, while others claim the hiccup persists.

Our own Sebastien Page also observed the flickering on his iPhone 5.

Here is an example of the flickering.

Pay attention to the flickering in the bottom left and top row of the virtual keyboard.

Are you affected by this issue?

It’s unknown how widespread this issue is as Apple isn’t talking, per usual.

My guess is it’s probably software-based and easily solvable with a future software update.

By the way, YouTube lit up with user videos depicting the issue (here, here, here, here and here) so the keyboard flickering thing definitely is not an isolated incident.

Feel free to post your thoughts and experience about this issue down in the comments.