Netbot, an App.net client for iOS users, and the sister client to the popular Tweetbot, has been unleashed on the App Store.

Just in case you weren’t aware, Twitter has been making some changes as of late, and it’s safe to say that they have’t been very popular among the tech community. As a result, a few alternative services to Twitter have emerged, and one of those is App.net.

Though there are some key differences between it and Twitter’s methodology, both from a technical level and a company level, the services are similar enough that it’s entirely possible to confuse NetBot with Tweetbot at first glance.

Both timelines look similar, but there are differences. The biggest difference is that App.net posts can be up to 256 characters, so you’re bound to see more text on screen in a single post when compared to Twitter. Also, retweets are called reposts, and favorites are called stars on App.net. 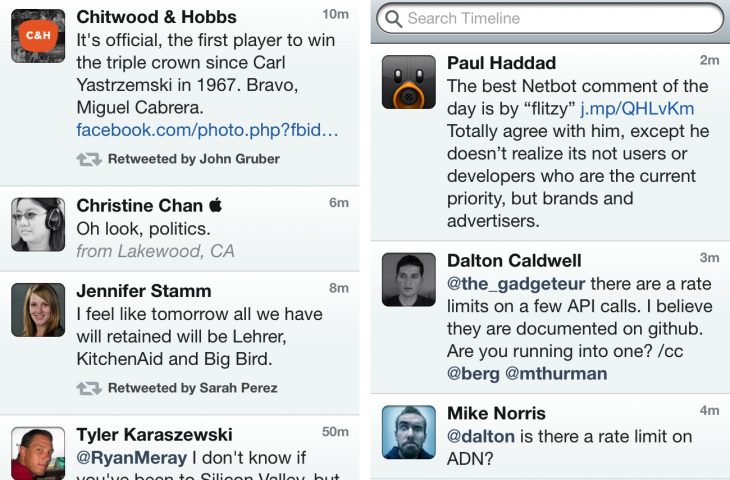 The new tweet and new posts screens, again, look virtually indistinguishable. The only big difference here is the character counter. 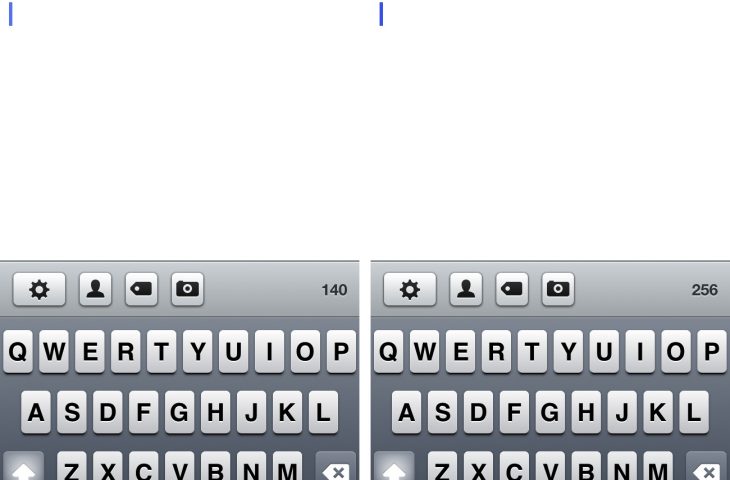 If you tap the new tweet or new post button, more options are revealed concerning that post. Notice, that with App.net, you have the ability to cross post to Twitter. Netbot detects any Twitter accounts on startup, and uses them for cross posting and searching. Currently, cross posting works with posts over Twitter’s 140 character limit, by truncating the post and providing a link to the full post on App.net. 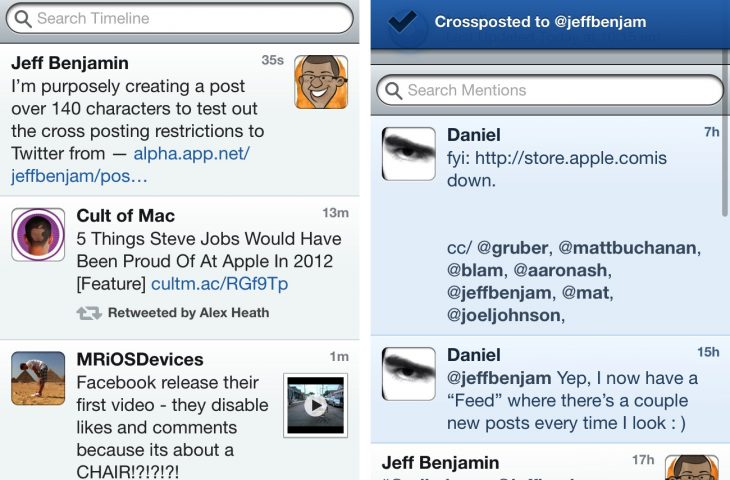 You’ll also notice that I only have one App.net account setup, and that’s probably all I’ll ever have. Unlike Twitter, it costs money to use App.net. When I signed up the price was $50/year, now that has gone down to $36/year. The fact that you pay for the service is what really separates App.net from Twitter. Whereas Twitter has started to cater more to advertisers, the biggest App.net customers will always been the users. 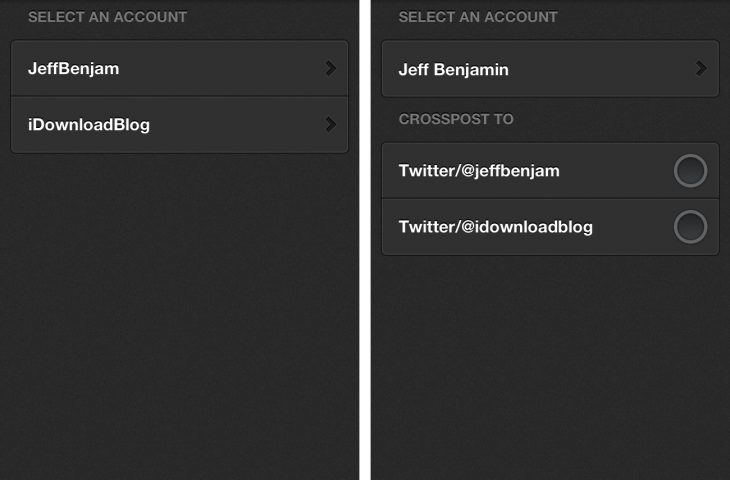 One of my favorite features about App.net are the header images that you can post on your page. These same images are pulled into Netbot, and really lend personality to a profile beyond simple avatars.

Here’s a header from my personal page: 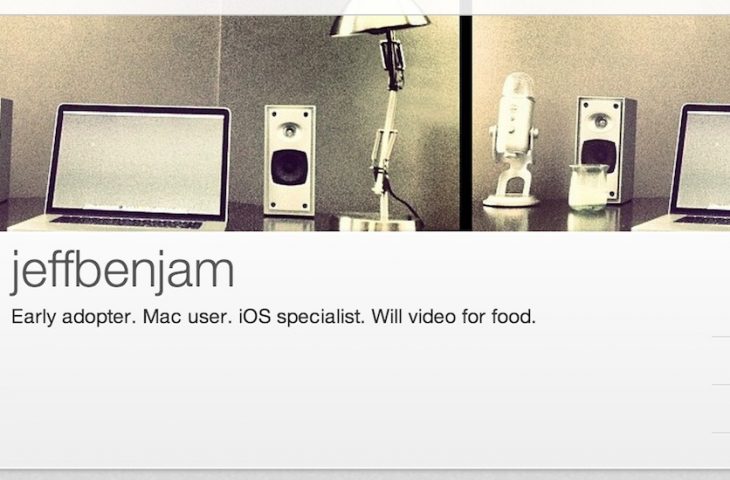 And here it is on Netbot in comparison to Tweetbot: 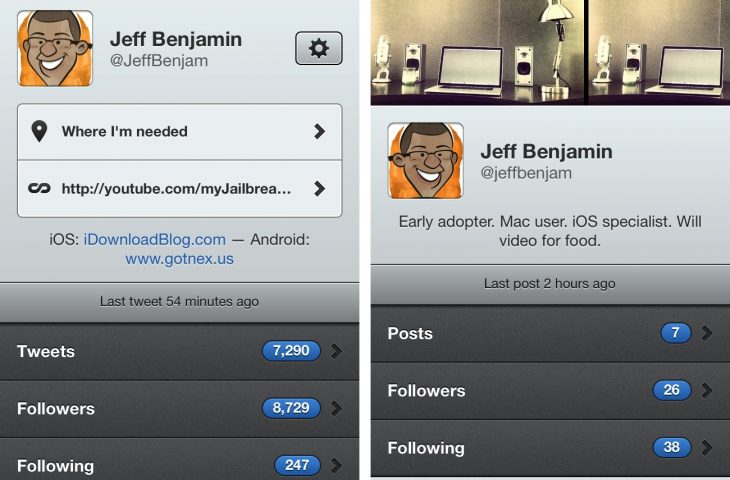 The post detail screen is largely similar, but notice the pop up indicating the amount of stars and reposts. 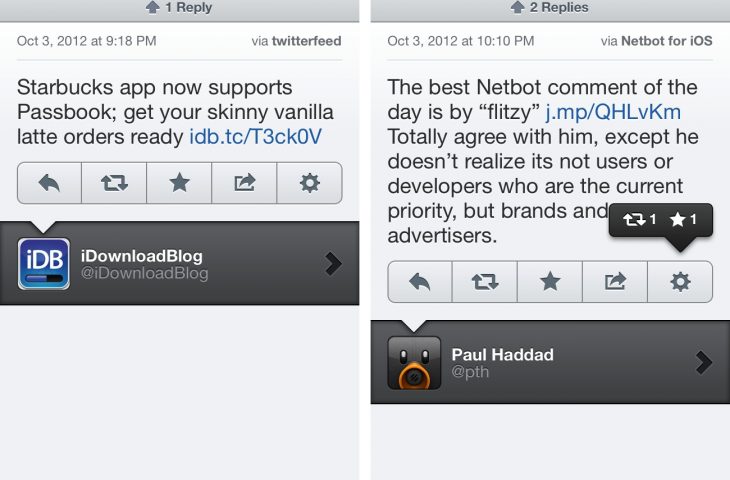 Searching is quite a bit different between the two clients. Search in Netbot features global timeline view, which is essentially every App.net thread — the full uninhibited stream of information. If you did this with Tweetbot, you would see a torrent of messages going across, because tons of people tweet. With Netbot, it’s a new service, which means it’s slow and steady. As the service becomes more popular, the stream will speed up, but hopefully the fee to entry will keep most spammers at bay. 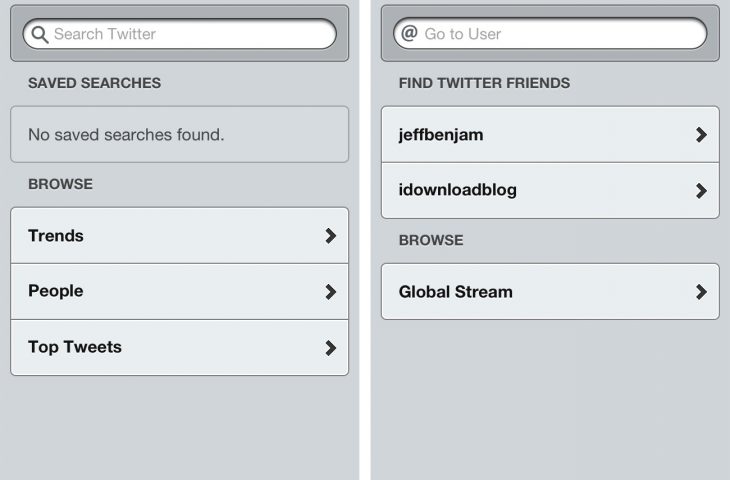 Settings are a bit different between the two clients, but most notable to me, is the lack of streaming support within Netbot. This isn’t a Netbot issue, it’s an API issue. The App.net API lacks a streaming option at the moment. This will likely change in the future. 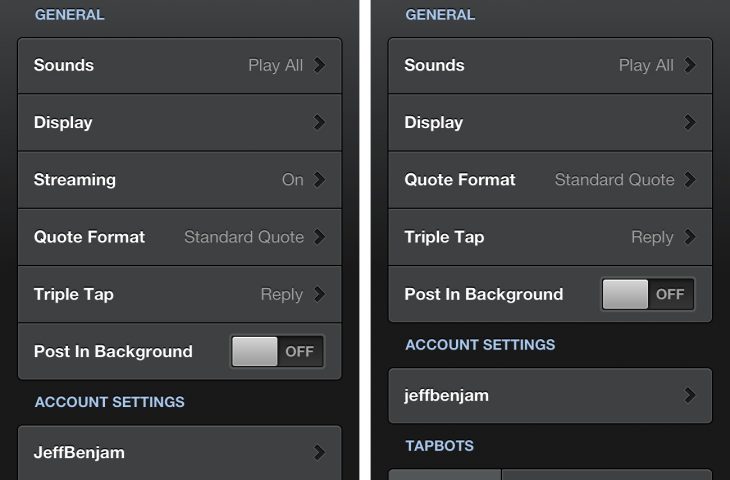 Those are the main differences between the two apps that I was able to recognize on first glance. I’m sure other differences exists, so if you’ve tried Netbot and you spot any, let us know about them in the comments below. Also, be sure to sound off on the whole App.net vs Twitter debate. Which service do you see yourself primarily using in the future?

Netbot is available for both the iPhone and the iPad, and both can be purchased for $4.99. Like Tweetbot, Tapbots feels that the iPhone and iPad clients differ enough to justify the separate purchases.

Currently Sebastien, and myself are signed up with App.net. If you’re there, be sure to give us a follow.