Adamant to lure folks to its retail stores, Microsoft loves to hire famous recording artist to perform for its customers. For example, Flo Rida, The Black Keys, Justin Bieber and Lenny Kravitz all played for Microsoft Stores in the past.

But something clearly went wrong with this one. Much to the bewilderment of store staffers, young rapper Machine Gun Kelly a.k.a. MGK (not to be confused with an American gangster during the Prohibition era) at one point jumped on the floor displays to do his act.

He bugged out terribly, destroying several notebook PCs in the process until staffers abruptly cut his mic. I guess MGK won’t be performing for Microsoft in the foreseeable future…

As reported by Kotaku, Microsoft pointed out that hip-hop magazine The Source actually hired the artist to perform at Microsoft’s Atlanta store for the publication’s Power 30 Issue.

Still, it’s remarkable that neither the software giant nor the publication briefed the 22-year-old MC on what was allowed and what wasn’t.

MGK even gave a Microsoft store staffer a finger. 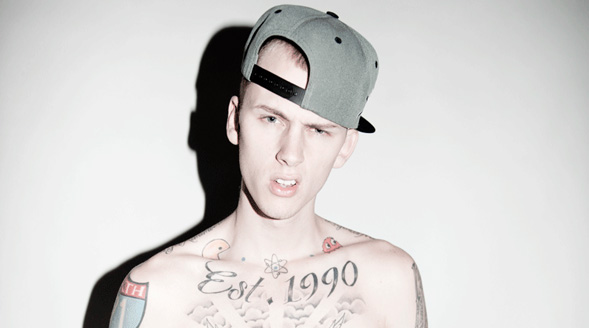 You may also notice the MC improvising lyrics with some strong language when warned to get off the store displays.

I wonder who gets to pay for the smashed PCs.

Sometimes, these things just get out of control.

But things could have been worse.

Good thing Justin Bieber performed for Microsoft back in the days when he wasn’t vomiting on stage.