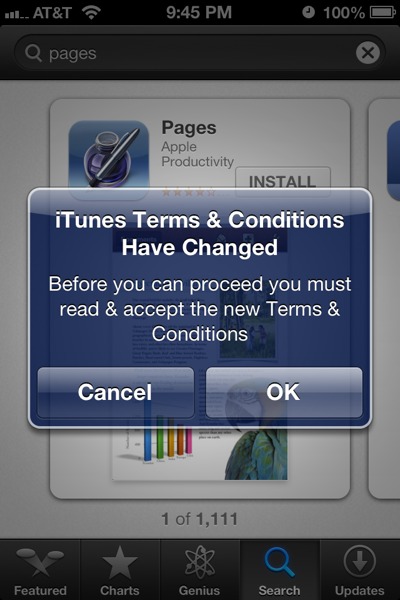 It was reported that some users earlier this morning were faced with an endless loop preventing downloads because Apple updated the App Store terms and conditions. The company has quickly resolved the hiccup, but now another interesting change in terms indicates Apple could be clamping on apps which promote titles from a different developer…

PocketGamer spotted a slight change in the new Terms & Conditions, now specifically saying that “apps that display apps other than your own for purchase or promotion in a manner similar to or confusing with the App Store will be rejected”.

The publication speculates that Apple’s tightening of the terms could indicate a change in direction, where Apple would flatly reject any app that advertises other people’s apps.

The wording is typically vague, but clause 2.25 appears to give Apple carte blanche to put any app that promotes titles from a different developer out of action.

At the moment, we understand Apple’s likely prime targets are pure app promotion services, such as (but not necessarily including) FreeAppADay, AppoDay, AppGratis, Daily App Dream and AppShopper, amongst others.

Some people think the decision spells trouble on certain apps that rely on cross-promotions as high traffic enables ad-funded free apps. Cross-promotions can also artificially boost download count and affect the app’s rankings in the App Store so Apple could be interested to simply protect the legitimacy of the App Store charts here.

Be that as it may, I totally understand Apple’s position and support their decision, although the news doesn’t bode well for useful app discovery programs like AppShopper, an app I use on a daily basis.

Perhaps Apple is looking to kill both app promotion services and app discovery software such as AppShopper in one fell swoop because the company is about to introduce its own app discovery features.

So far, Apple only tweaked the search algorithm and the App Store layout so we have yet to see how the Chomp acquisition fits into a greater scheme.

The bug that prevented all App Store downloads appeared to have been limited to the U.S. App Store and was first reported by MacRumors.

Did you have trouble downloading apps yesterday?

And, do you support Apple’s decision to reject apps that advertise apps by other devs?