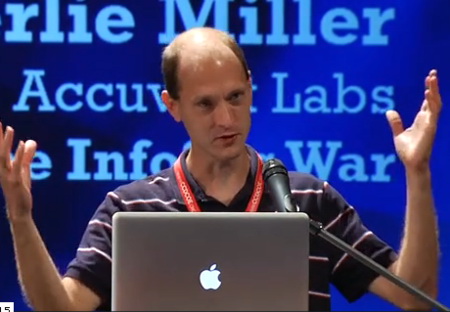 If you are a long-time iDB reader, you’ll likely recognize the name Charlie Miller. The iOS hacker has broken through the security of everything from the iPhone to the App Store.

Well it looks like Miller’s iOS hacking days are over, at least for now. The systems expert announced on Friday that he will be joining Twitter’s security team, starting next week…

Forbes has the scoop:

“Miller, who previously worked at the consultancy Accuvant, told me in a phone call that he couldn’t offer any information on exactly what he’ll be doing at Twitter—He wouldn’t even name his title. But I’ve heard rumors since last winter that Twitter has sought to hire Miller as a full-time penetration tester to probe the service for hackable vulnerabilities and help fix them. Given his pedigree as an elite pen-tester for several security firms and a former “Global Exploitation Analyst” for the NSA, it’s likely his new job will involve playing that same role as a highly-skilled intrusion artist for Twitter’s security team.”

In addition to his NSA training, Miller has a laundry list of hacks. He’s won multiple Pwn2Own competitions, finding exploits in both the iPhone and Apple’s MacBook Air. He also co-wrote the iOS Hacker’s Handbook along with Stefan Esser (i0n1c).

You’d think that with his relationship with both the Mac and iOS platforms, Charlie would have ended up at Apple. But the hacker says that the company never “floated the idea” to him. And honestly, that’s probably a good thing for us jailbreakers.