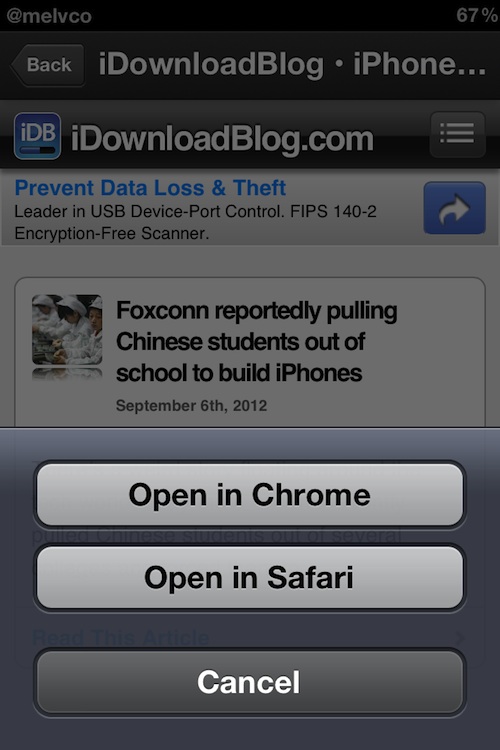 Gmail for iOS received a minor update today, bringing the app to version 1.3.1. The email client now runs a bit more smoothly, and more importantly, it can now open links in the Chrome browser.

This is now the third app that Google has updated with this feature, behind Google+ and Sparrow, and it could be a preview of Google’s future plans for the iOS platform and its iOS applications…

As noted by TheNextWeb’s Matthew Panzarino, it seems as though Google has made its own workaround to Apple’s rule that users cannot make a third-party browser the default in iOS. And it may be more than that. With 20+ apps in the App Store, Google may be building its own sub-OS on Apple’s platform.

Think about it. Google has an email client, a messaging and VOIP client, a search app and a web browser in the App Store. And when you add in the expected YouTube and Google Maps applications, Google will have most of the core apps on iOS covered. Now imagine if they all started talking to each other.

What if Google added the ability to open map links in Google Maps to future apps — similar to how it has added the “open in Chrome” option. Or what if it made it so when a user tapped on a phone number inside Chrome, or Gmail, it launched Google Voice instead of the Phone app? How far could this go?

Of course, this is all just speculation at this point. But you have to wonder what Google’s end game is with its apps on iOS, and why they are slowly starting to talk to each other. And what’s Apple make of it?

At any rate, if you want to download the new Gmail app, you can find it in the App Store, for free. Obviously, you’ll have to have Chrome for iOS as well to use the new “open in Chrome” feature.