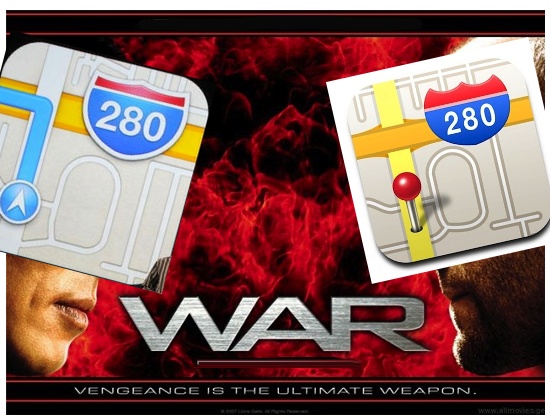 One of the headlining stories of iOS 6 is the fact that Apple has taken over the Maps application. Not only did it rebuild the app from the ground up, but it also stopped using Google’s mapping data.

From what we’ve heard, this was a long time coming. According to an ex-Google employee, the two companies have been battling for years over what Apple wanted to do with the Maps application.

So now that Apple has total control of it, the Maps war is over, right?

Google’s SVP of Commerce & Local Jeff Huber made an interesting comment on his Google+ page today, in response to the following inquiry from an iOS user:

“Just REALLY hope all this hard work is still appreciable from an iOS device.. I can assure you that just because some of us have iPhones and iPads doesn’t mean we don’t prefer google maps over the elementary stuff apple is said to be proposing! We need a great Google Map app. Pleeeeease!”

Now, as 9to5Mac’s Seth Weintraub points out, Huber’s response doesn’t sound like just a web app makeover. It sounds like the company is planning to release its own standalone iOS maps application. Mix in the recent announcement that it would be bringing its 3D maps to iOS devices in the near future, and that’s gospel.

So what’s Google’s plan here? Surely it can’t take on Apple’s new Maps application, which, starting in October, will be installed (and unremovable) on every single new iOS device. Can it?

It’s possible. Judging by initial reactions to Apple’s Maps application, people are a bit disappointed. Sure, it’s only in beta. And Apple can add 100 new features to it by the time it’s ready for public release in the fall. But Scott Forstall made it clear that the app won’t have built-in transit directions. And it won’t have Google’s popular Street View.

However, even without these two features, Apple still has one major advantage over Google: third-party app support. Think of all of the apps you use with built-in Maps support. Some developers may use a third-party mapping service, but a majority of them use the native Maps application because, well, it’s native.

Google has a plan though. The company recently announced that it has slashed the costs for developers to use its Maps API in their applications by 8x. So instead of charging $4 per 1,000 map loads, it’s now just $0.50. That should help garner some third-party support, right?

So why is Google even worried about mapping software on iOS, does it have its own mobile platform? Easy: money. It’s a fairly well known fact that the revenue Google makes on iOS is far more than it makes off of its own platform. This comes from mostly advertisements — a lot of which were carefully placed in the stock Maps application. Obviously it can make up for some of this lost revenue if it can figure out away to get on a large amount of iOS devices again.

We’ll obviously know more once Google decides to unveil what its “amazing” plans for iOS are. Maybe we’ll hear something at the I/O conference next week. If it is a standalone application — and chances are, it will be —  it’ll be interesting to see if people choose to use it over the built-in Maps app. Or more importantly, if Apple even approves it.

Either way, it doesn’t seem like the iOS maps war is over. If anything, it looks like it’s just getting started.