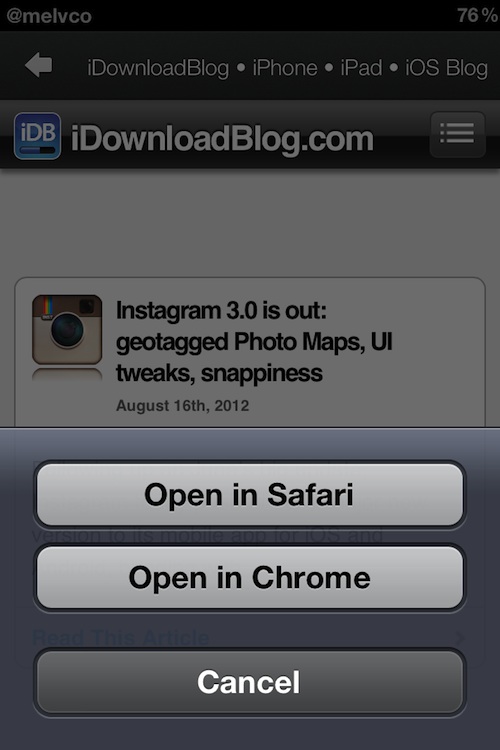 Google updated its Google+ iOS client yesterday with just a handful of changes. There were some bug fixes, performance enhancements, and the age limit for creating hangouts was lowered to 13.

But perhaps the most interesting change in the client is the new Safari workaround. For those of you who have it installed on your device, Google+ can now open web links in Google’s Chrome browser…

Why is this so intriguing? Well because Google is fighting an uphill battle with Chrome for iOS. Apple is very prejudice against third-party browsers, and doesn’t give them access to the speed-increasing Nitro Javascript engine or default status. But, as TheNextWeb points out, Google may not need the latter.

“It turns out there actually is a provision for directing links to particular apps, and it’s provided by Apple itself. It’s called URL schemes and it’s an official tool that Apple gives developers that allows them to communicate with apps from ‘outside…’

…This URL scheme is the one that Google is using to send clicks from the URLs in posts of its app out to Chrome. For now, it’s an option, but moving the option to a settings menu could effectively make it a default for many users.”

And what if the Google+ client is just the beginning? How long before Google implements this workaround in all of its iOS apps? Think about it, there’s quite a few: Gmail, Google Search, Google Earth. Plus, with the removal of native apps like Google Maps and YouTube, expect those to come.

All of this would essentially make Chrome the default browser, well, by default. Especially for folks who use a large number of these applications. It’s a smart move, and it’ll be interesting to see how it plays out.

Of course, if you’re jailbroken, making Chrome your default browser in iOS is as easy as installing a tweak. But not everyone is into this. And for those folks, the new Google+ update is a step forward. Download it here.

Oh, and don’t forget you can follow iDB on Google+ here.