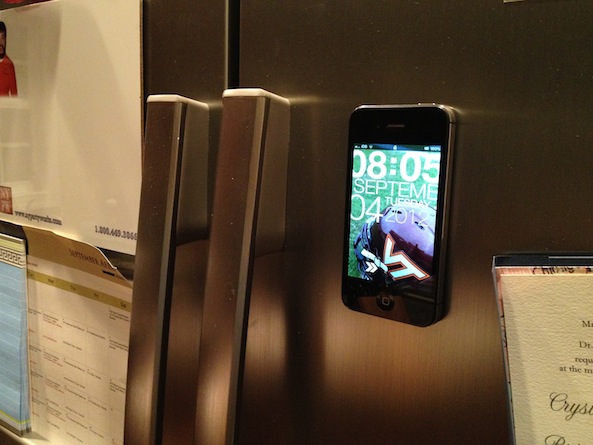 Inspired by a cord covered kitchen counter, MagSkin’s humble beginnings centered around a hobby project for friends. MagSkin’s founder took a small sheet of adhesive magnet and applied it to the back of an iPhone. Following encouraging words from admirers, MagSkin headed to Kickstarter to find interested investors.

MagSkin successfully raised $2,000 more than necessary with 353 backers. Now, we can all enjoy slapping our iPhone on any magnetic surface and five lucky winners will be able to take one home for free…

Simply, the MagSkin is a thin sheet of adhesive magnet with a vanity covering. The unit is cut specifically for the iPhone 4/S, but plans are underway to release an iPhone 5 edition merely weeks after next week’s announcement.

I originally played with a few early prototypes that suffered from adhesive issues, causing the colored back to peel away from the magnetic sheet. After addressing these early issues, the developer successfully adjusted the adhesive between the two sheets and even tweaked the MagSkin edges. Further study proved if the MagSkin used a tapered edge with the new adhesive, the two skin layers will not separate. 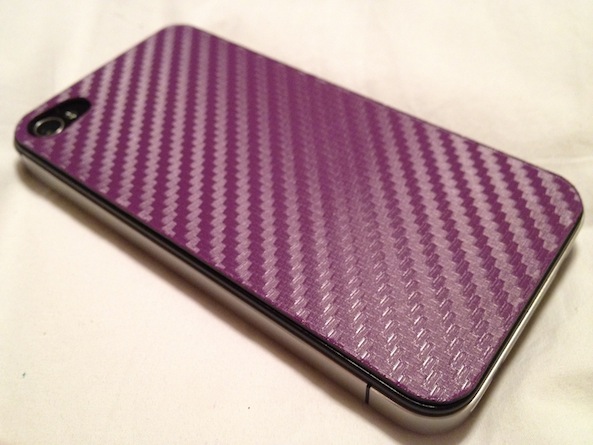 The current version is approximately 1mm thick, with rounded and tapered edges, and a camera and flash hole. As the skin is much thicker than traditional skins, it will not fit into an iPhone case. However, I assume it will still work with a bumper case, so long as the bumper does not extend over the back of the iPhone.

Twelve skins are available with three different textures, snakeskin, heat sensitive film, and carbon fiber. Personally, I have been playing with the purple, silver, black, and heat sensitive film models. I am happy to report, the skins are reusable, within reason, and only leave a thin film, which easily wipes off on a shirt.

MagSkin provides an easy way to place your phone on any magnetic surface. I used mine primarily on the refrigerator in the kitchen, as I tend to lose mine amid the cooking ingredients and mail on the table. Before my morning commute, I threw my phone on the fridge and ate my cereal while reading the latest news with Flipboard.

Thanks to the included MagDock, any non-ferrous surface may become a new place to slap your favorite gadget, from wood to mirrors, glass, plastic, and drywall. The MagDock is an additional adhesive magnetic sheet the exact size of the iPhone. MagSkin’s Kickstarter video exemplifies the additional magnetic opportunities.

Sometimes, simple ideas really take off and MagSkin ($19.99) may be headed to stardom. After the developer changed the initial issues, MagSkin became a solid product, granting the user the ability to place the iPhone on a metallic surface or pair with a MagDock. It makes your iPhone easy to find in the kitchen or ready for a meeting on the office filing cabinet. To get one of your own, use coupon code “iDownloadBlog” for 25% off your whole order until Friday, September 7 and also enter our giveaway.

In order to win one of five MagSkins with a MagDock:

Winners will be picked and contacted by the end of the week via Twitter DM.

Good luck to everyone, and thank you to our friends at MagSkin for making this amazing giveaway possible!

Thanks everyone for participating. We’ll have another giveaway really soon so don’t go anywhere!