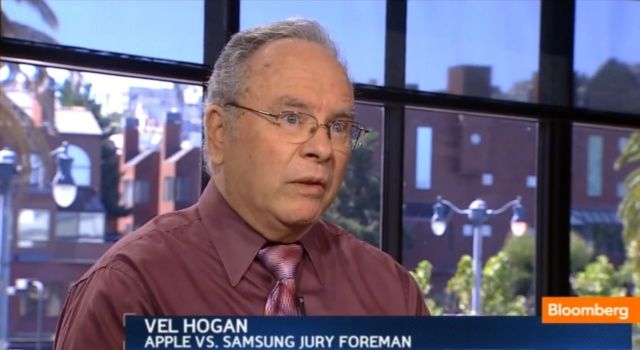 Some U.S. sales of Samsung smartphones will “probably be” banned, said Vel Hogan, the Foreman of the California jury in Apple’s successful patent-infringement lawsuit against its South Korean rival. On Friday, the U.S. District Court awarded $1.05 billion in damages.

Although at first the jury was “inundated with evidence” and faced a stalemate, Hogan told Bloomberg TV momentum swung toward Apple after he had an “ah-ha” moment while considering the case at home.

I had what we would call an ah-ha moment and I suddenly decided I could defend this if it was my patent.

From that point, the jury went claim-by-claim, comparing the evidence against the judge’s instructions.

Hogan defended the more than $1 billion awarded Apple, describing it more as a wake-up call for large tech companies than punishment.

If any company decides to ignore the stipulations and the rules and get too close, and they infringe and they do it willfully, they need to understand that if they take the risk and they get caught, they should have to pay for it.

The damage amount was calculated at a middle-point between the 35 percent of profits Apple claimed it lost from the infringement and the 12 percent Samsung suggested.

Ironically, no member of the jury which sided with Apple owns an iPhone, Hogan said. Indeed, he said he is a “PC person” and his wife owns a Samsung phone — but it’s not a smartphone. He had some advice for Samsung and other smartphone makers hoping to cash-in on the popularity of the iPhone without landing in court.

“Nokia is an example. BlackBerry is an example. Motorola is an example. Just because it has an Android operating system that makes it seem Apple-like, it is not. They don’t have to be 100% the same. You can back off from that and have an acceptable product,” Hogan said.

“Acceptable” is the keyword. Nokia and BlackBerry are two smartphone makers hanging onto slender threads after trying to challenge Apple. Motorola has never regained the buzz and excitement once generated by its original Razr.

Can the iPhone’s rivals be happy to offer “acceptable” alternatives to Apple, or will competitors always fly a little too close to the legal flame?