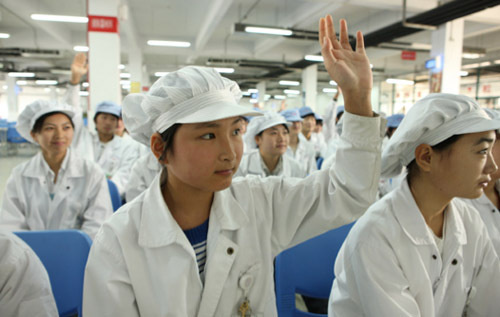 Foxconn, Apple’s largest manufacturer of iPads and other iOS devices, has been taking heat for several years now for its poor working conditions. These conditions were said to be a major factor in a string of suicides at the company.

The bad press reached a fever pitch earlier this year, when The New York Times published a lengthy article that painted a bleak picture of the electronics-maker. But according to a new report, it’s turning things around…

The FLA (or Fair Labor Association) released a report yesterday, regarding its recent visits to Foxconn’s factories. And surprisingly, they praised the manufacturer for taking major strides to create a safer work environment.

“The FLA logged 284 changes made by Foxconn this year, 89 more than it was required to complete, the group said in a report released today. Foxconn, which has about 178,000 workers making Apple devices in China, reduced the number of working hours per week to 60, including overtime; redesigned equipment to protect employees; and is working with authorities to get migrant workers unemployment insurance.”

The organization is hoping that Foxconn and Apple’s cooperation will have a ripple effect in the industry. Earlier this month, China Labor Watch called out Suwon, the-maker of Samsung’s Galaxy smartphones, for intentionally hiring child workers and having working conditions “well below” those of other suppliers.

Of course, Foxconn isn’t out of the woods just yet. China Labor Watch also says that Foxconn’s employees are still required to complete the same amount of work as before, prompting them to work harder in less time.