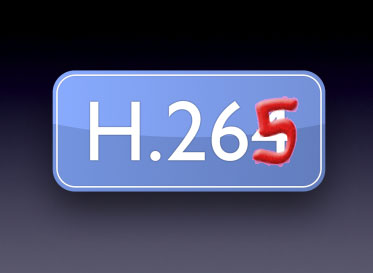 The Moving Picture Experts Group (MPEG) announced today a draft of the new video compression standard called H.265 and also known as High Efficiency Video Coding (HEVC) and MPEG-H Part 2. As the name suggests, it delivers the same video quality in half the bandwidth of the current (nearly a decade old) H.264 standard, which is adopted across Apple’s iOS and OS X platforms…

According to Per Fröjdh, head of Visual Technology at Ericsson Research (he is also chairman of the Swedish MPEG delegation):

There’s a lot of industry interest in this because it means you can halve the bit rate and still achieve the same visual quality, or double the number of television channels with the same bandwidth, which will have an enormous impact on the industry.

Sounds like the coded Apple would want to use to feed live TV via iTunes to its mythical networked TV set. The upcoming bandwidth-efficient video compression technology should also lend itself nicely to mobile phones.

The availability of a new compression format to reduce bandwidth, particularly in mobile networks where spectrum is expensive [and] paves the way for service providers to launch more video services with the currently available spectrum.

First chips, devices and applications based on H.265 are expected to hit the market in early-2013.

The video compression draft (via ITWire) uses just half the bandwidth of H.264.

By 2015, video is predicted to account for 90 percent of all network traffic, necessitating a H.264 replacement.

Apple, of course, has always been big on H.264, having supported the video compression technology via its QuickTime platform on both Macs and iOS devices.

In fact, in iPhones, iPads and iPods, H.264 is the system-wide media codec, though its support in iOS doesn’t go as deep as with OS X.