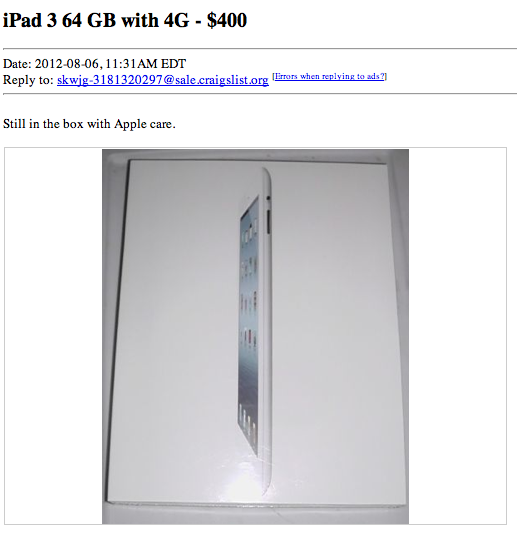 Craigslist is arguably one of the web’s most popular destinations for folks looking to buy stuff at a bargain. A virtual garage sale of sorts, one can find anything from furniture to exercise equipment.

Of course, you can also find electronics on Craigslist — Apple products even. But as we’ve said before, you should always be wary of buying Apple gear in a parking lot. And again, here’s why…

WTAE, a Pittsburgh news station, is reporting that police are catching on to a new type of Craigslist scam in the area that involves iPads. Apparently, thieves are listing Apple’s tablet on the website at a cheap price, and then luring potential buyers in for a face-to-face meeting.

As you can imagine, this doesn’t end well for the buyers.

“Police told Channel 4 Action News investigator Paul Van Osdol that each victim was robbed of several hundred dollars. One was forced at gunpoint to withdraw money from an ATM.”

And as it turns out, this isn’t just happening in Pittsburgh. The same scam is being reported in areas all across the US, including San Diego, Houston, and Palm Beach, Florida. And all instances have a similar storyline where Craigslist iPad buyers get robbed at the exchange.

The old saying, “if it sounds too good to be true, it probably is” just doesn’t seem to cut it anymore. With the economy the way it is, and the holidays coming up, we wouldn’t be surprised if this continued to happen. Just make sure that it doesn’t happen to you.