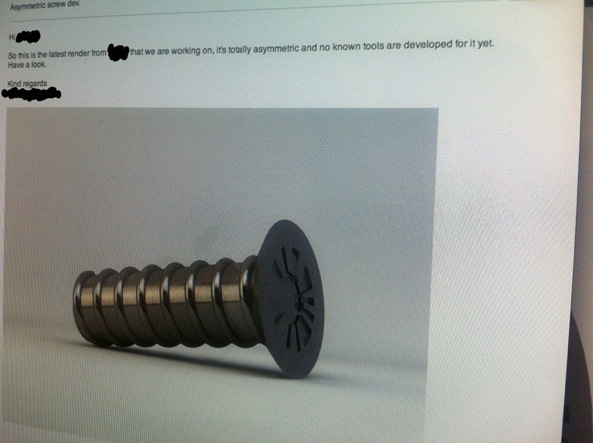 The next iPhone won’t just screw developers with its taller, four-inch display and an increased resolution of 640-by-1136 pixels (though both iOS 6 and the SDK have been discovered to be scalable for taller displays) and accessory makers with a redesigned dock connector (unless Apple provides a 30-pin dock adapter), it could as well screw repair shops (pun intended) with a special screw design calling for asymmetric heads.

As if sealing the battery and allegedly using a new in-cell display technology wasn’t enough, now iPhone repair shops will have to obtain non-existent tools just to pry open the upcoming device…

The above image was published by a user on Reddit (via BGR via @9to5mac).

It represents a rendering of the new screw design by a company that’s apparently working on it “for a certain fruit company”. The design is described as “totally asymmetric” and allegedly “no known tools are developed for it yet”.

It was impossible to glean additional information from the image, like the size of the screw. The next iPhone should be 7.6mm thick, 1.7mm thinner than the current iPhone 4/4S. 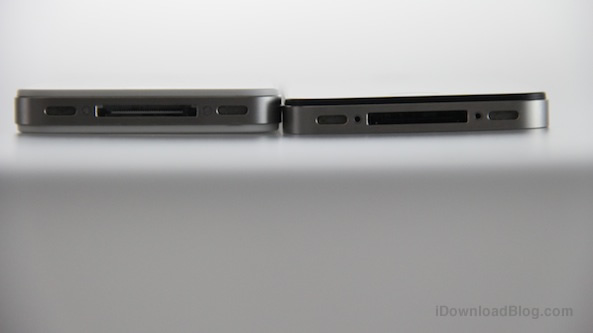 As Jeff observed, the 1.7mm difference may not seem much on paper, but it’s a substantially different experience when held in one’s hand. One way to feel a 7.6mm iPhone is to remove the back cover on your iPhone 4, which essentially slims it down close to 7.6mm, as seen above.

Apple allegedly shrank several components to fit inside a thinner case, which meant switching to in-cell display technology with a 0.1mm thinner glass, a 40 percent smaller SIM card tray and a brand new dock connector with a rounded appearance, MagSafe-like functionality and similar in size to the microUSB port.

One thing is certain: a bunch of repair shops and the likes of iFixit, which makes repair guides and performs teardown analysis, will hate Apple for this.

iFixit already observed that Google’s Nexus 7 handsomely beats the third-generation iPad on repairability. They also called the new MacBook Pro with Retina display one of the least repairable laptops they’ve ever encountered.

A year and half ago, iFixit slammed Apple for switching to Pentalobular screws for the iPhone 4. Though a Pentalobular screw is similar to Torx, it has five points instead of six and the points have a rounder shape, prompting iFixit to call these “Evil Proprietary Tamper Proof Five Point Screw”.

Maybe Apple’s goal with the asymmetric iPhone 5 screws is similar, to once again attempt to prevent tampering using regular screwdrivers or allen keys and hopefully become the sole repair shop for iPhones?

Are you calling shenanigans on this one?