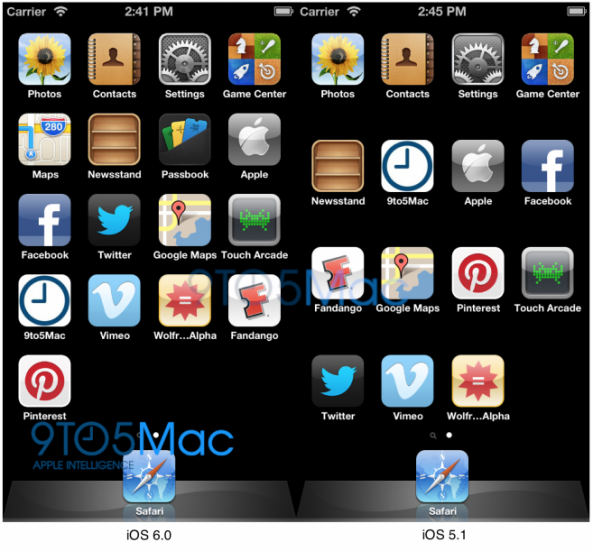 It’s widely believed that the new iPhone will, for the first time, feature a larger screen. It seems like it’s been all but confirmed with reports from major news outlets and leaked next-gen iPhone parts.

But if you’re still skeptical about Apple enlarging the screen on its smartphone, you might want to check this out. iOS 6 has been discovered to be completely scaleable to fit a taller, 640 x 1136 display…

“Thanks to some tweaks to the iOS Simulator application that is included in the iOS development tools, we were able to run the simulator at the rumored next-generation iPhone display resolution of 640 x 1136. We did this running both the current public release of iOS 5.1 and the upcoming iOS 6.0. The iOS 5.1 simulator displayed the home screen with a stretched set of four rows of icons. On the other hand, iOS 6 displayed five complete rows — as our sources said Apple was testing for taller iPhone displays.

This proves that the upcoming release of iOS 6, which will obviously come pre-loaded on the new iPhone, is well-aware of taller iPhone displays. It scales perfectly to the taller resolution.”

The site was the first to report that Apple was testing iPhones with 3.95-inch, 640 x 1136 displays back in May of this year. The resolution indicates that the new handset will be taller, but will be the same width as the current model.

Along with a larger display, the sixth-generation iPhone is said to feature a faster processor, an all-new design, and LTE compatibility. And Apple is expected to unveil the device at a media event on September 12.