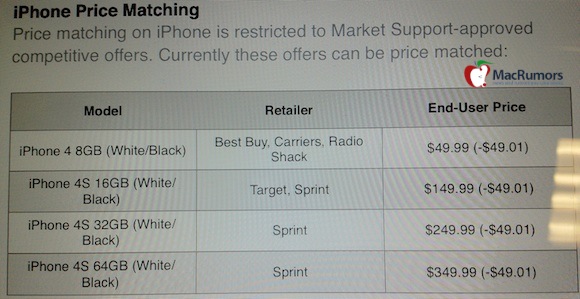 Last weekend we reported that Sprint, a large wireless carrier here in the US, had started discounting the iPhone 4S by $50. The move wasn’t surprising, as we’ve seen similar discounts from other carriers and retailers.

But word is getting around today that Apple has finally joined the party, and has given its retail stores the authorization to match the discounted prices from approved major retailers and carriers up to $50 dollars…

“But a source has now revealed to MacRumors that Apple’s retail stores have been given authorization to match these discounted prices from approved major retailers and carriers. In all cases, Apple will discounted iPhone 4S and iPhone 4 models by $49.01 upon request…”

The site goes on to say that users will likely need to point to the source of the discount to get Apple to price-match, and at this time, it looks like the offer is only for retail store purchases, not online.

The fact that Apple is now discounting the handset bodes well for the rumored September release date for the next-gen iPhone. Apple rarely of discounts on newer items, except for just ahead of product refreshes.

There’s no word on when Apple’s price-matching stops, but we were told that Sprint’s discount is slated to end on September 14th. So if you’re not interested in the new iPhone, you might want to check this out.