Two months ago a video made rounds comparing side-by-side the current iPhone 4S front panel to a 4.07-inch panel allegedly belonging to a sixth-generation iPhone. Another video showing off a partially assembled device scrapped together from the allegedly leaked parts also piqued our interest.

And now, a new clip hits the Interwebs comparing the front panel of the current iPhone 4S and the rumored iPhone 5. Some of the stuff that we gleaned from the seven-minute clip include a centered FaceTime camera and a taller display with a 16:9 aspect ratio, which aligns nicely with the previously leaked schematics. More findings right below…

iPhoneinCanada points to the clip and a series of images highlighting the differences between the two parts. MacRumors observes that “not only is the new part taller than the corresponding iPhone 4S part but it is also 0.1 mm thinner and offers more light transmittance and more scratch resistance than its counterpart”.

The video is made by iPhone parts company ETrade Supply so it’s entirely possible the company is simply looking to get some free press. As such, the report and the video should be taken with a grain of salt.

Here is the top part.

Notice the slightly narrower camera hole on the FaceTime glass lens of the iPhone 5 front panel. The light sensor hole is moved from the top to the left side of receiver and is also noticeably smaller. The site also claims that the iPhone 5 front part is more scratch-resistant than its iPhone 4S counterpart.

The 0.1mm thinner display likely is the result of in-cell technology that eliminates a layer by building the capacitors inside the LCD assembly itself. 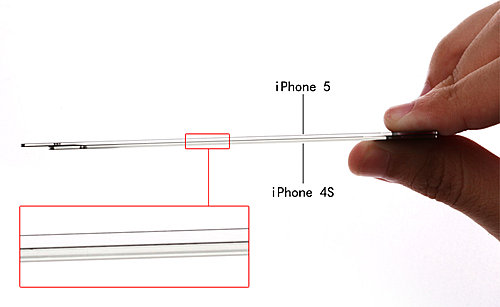 Perhaps the biggest change: the iPhone 5 display is now close to 16:9 versus the 3:2 aspect ratio for the current iPhone.

Feel free to post your observations down in the comments.