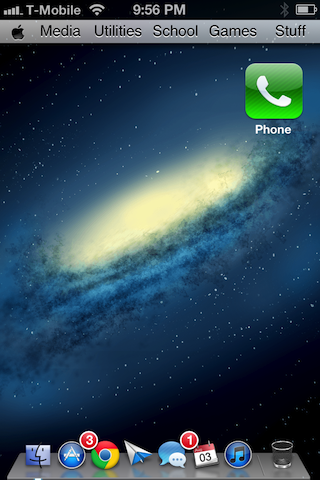 If you’re searching for one of the best looking themes for the iPhone, then search no further than iOS X Ultimatum. The sequel of sorts to the original OS X Lion Ultimatum, this theme seeks to merge the desktop and the small screen into one environment.

Does this theme perform just as well as it looks? Check inside for the full scoop…

Themes, whether it be WinterBoard or DreamBoard, aren’t normally praised for their efficiency or familiarity from a usage standpoint. People use themes because they look unique.

iOS X Ultimatum is no different in this regard; it looks great, but the performance is hit and miss.

The main issue I encountered while using this theme was failing to get my taps to register on screen. I found myself having to tap multiple times on the same item for it to actually pick up my input.

Seeing as that one of the iPhone’s hallmarks is its responsiveness, this isn’t a good thing. All other gripes besides that are just limitations to the DreamBoard theming platform itself, and not necessarily a fault with the theme.

Visually, though, iOS X Ultimatum is hard to beat. The graphics are sharp, and the dock and menu bar are easy to make out. It genuinely looks like OS X Mountain Lion was ported to the iPhone.

If you’re a fan of themes and DreamBoard in particular, then you won’t want to miss this theme. It’s not as good as the original, but it’s a fine addition to the DreamBoard library.

On the flip side, as I always say; if you don’t like themes, then this one won’t be the one to sway your opinion.

DreamBoard is a free download on Cydia, but the theme itself is $2.00. Unlike most purchases, this theme is available via the ModMyi forums.

What do you think? Would you consider using iOS X Ultimatum?