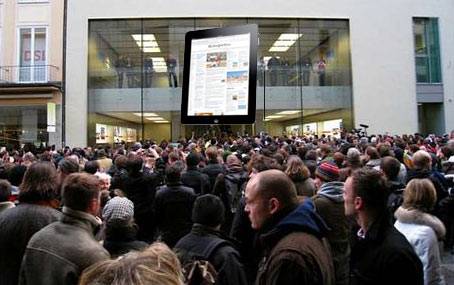 If you count iPads as PCs, as research firm Canalys does, Apple had the biggest single impact on growth rates in worldwide PC shipments during the second quarter of this year, surging to a cool 19 percent global market share. In fact, if it weren’t for Apple’s tablet, shipments of desktops, netbooks, notebooks and tablets would have probably experienced a decline rather than a solid twelve percent year-on-year growth.

Strong sales of the new iPad, which went on sale mid-March in the U.S. and nine additional countries, along with a $100 price decrease for the 16GB WiFi iPad 2, were cited as major growth drivers for the whole PC market…

The tablet, per Steve Jobs’ prediction, killed off the netbook and is now eating into sales of traditional notebooks and desktop PCs.

Tablets in all shapes, sizes and price points (with $199 increasingly becoming the sweet spot) continue to be all the rage. Steve Jobs noted as much predicting the downfall of the netbook at the January 2010 iPad introduction, he said (mark 1:30):

Netbooks aren’t better at anything. They’re slow, they have low-quality displays and they run clunky old PC software. So, they’re not better than a laptop at anything, they’re just cheaper – they’re cheap laptops.

Turns out Jobs was right after all.

Per Canalys data, total tablet shipments increased 75 percent to 24 million units and now represent 22 percent of all PCs sold. This means that nearly one out of four PC devices sold during Q2 2012 was a tablet.

There is now a large base of replacement buyers that simply must have the latest Apple product, and the decision to continue shipping the iPad 2 at lower price points has opened up new customers, for example in education.

As for the new iPad, Evans noted the device is ripe for some storage upgrade.

One drawback of the stand-out retina display in the new iPad, however, is the increased storage demanded by HD content. An upgrade, without a big price increase, is a must for the next generation of product.

According to Canalys (they refer to tablets as ‘pads’):

Growth in pads more than compensated for disappointing sales of Ultrabooks. The new iPad had the biggest single impact on growth rates in the quarter, but Asus and Samsung made progress with their Transformer and Galaxy Tab product lines.

Samsung is a distant second in terms of tablets and Asus, which launched TF300 at a sub-$400 price point, has risen to become the third largest tablet vendor globally. 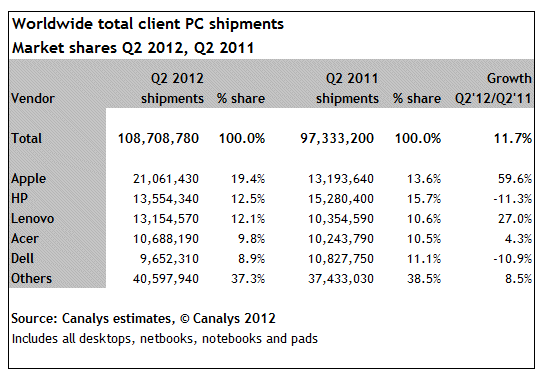 Apple is widely thought to be delivering a response, the mini iPad, around fall.

Cupertino, of course, is fighting Samsung in the patent trial of the century which kicked off on Monday in a San Jose court in northern California. Should Apple prevail in court, Samsung is facing a U.S.-wide ban on the sale of its Galaxy-branded smartphones and tablets.

From your experience, is the iPad to blame for lackluster PC sales?