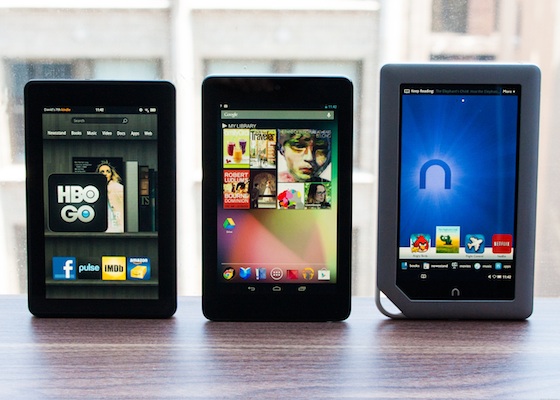 Proponents of the idea that Apple won’t make an “iPad Mini” due to the lack of demand for smaller tablets, may want to rethink their position. Several major retailers are reporting lightning fast sellouts of Nexus 7 stock.

For those who came in late, the Nexus 7 is Google’s recently-unveiled 7-inch slate. And between its high-end components and $199 price tag, some folks believe that it could pose a serious threat to Apple’s tablet marketshare…

Reuters is reporting that several major US retailers, including GameStop, Staples, and Sam’s Club have quickly sold through their initial stock of Nexus 7 tablets:

“GameStop said on Friday it had already run through its first two allocations of the tablet, co-developed by Google and Taiwan’s Asustek that starts at $199 and has drawn glowing reviews from major gadget reviewers.

Sam’s Club, the warehouse chain owned by Wal-Mart Stores Inc, and Staples listed the device as being out of stock on their websites as of Friday. Office Depot’s website continued to offer the device for sale as of the afternoon.”

Of course, the true test for the Nexus 7 will be whether or not it can sustain this kind of popularity. Remember, Amazon’s Kindle Fire was met with similar enthusiasm last fall, but sales have since dramatically tapered off.

Nevertheless, the commotion seems to have gotten Apple’s attention. After more than a year of rumors that the company had a sub-8-inch iPad in its labs, with no idea on whether or not it was going to release it, it appears that it’s finally ready to pull the trigger. Recent reports from both Bloomberg and The Wall Street Journal claim we’ll see the tablet by the end of the year.

It’ll be interesting to see what Apple has come up with here. We know that it can do the high-end Retina display tablets, but can it do the smaller, low-end tablets? It sounds like we’re going to find out this fall.