In a surprising reversal of its position on competition related to the Surface tablet, Microsoft admits in an annual report its tablet competes with PC makers after all, going as far to note that the Surface might even hurt Windows 8 sales. Redmond has been criticized a lot for entering the hardware game to compete with vendors who make various Windows devices.

PC makers are unable to compete with Microsoft on level ground because their already thin margins are stretched even thinner as they must pay license fees to Microsoft to use Windows 8 on tablets, an added cost that makes their gadgets more expensive…

Here’s what the Windows maker wrote in its 10-K filing to the U.S. Securities and Exchange Commission (via The New York Times):

“Our Surface devices will compete with products made by our OEM partners, which may affect their commitment to our platform”. If Windows 8 doesn’t become popular enough, that could “make it more difficult to attract applications developers to our platforms,” Microsoft also warned.

This is in stark contrast to Steve Ballmer’s public comment that “the importance of the thousands of partners that we have that design and produce Windows computers will not diminish” because of Surface.

Backpedalling on its critique of Apple’s post-PC approach, Microsoft wrote this:

A competing vertically-integrated model, in which a single firm controls the software and hardware elements of a product and related services, has been successful with some consumer products such as personal computers, mobile phones, gaming consoles, and digital music players.

Wait, but Microsoft is also vertically integrated, no?

We also offer vertically-integrated hardware and software products and services; however, our competitors have been in the market longer and in some cases have established significantly large user bases.

This sounds like backpedalling on Microsoft’s stance on the post-PC world articulated earlier this month at the company’s Worldwide Partner Conference, when the company’s chief operating officer Kevin Turner noted that “in our view, Apple has it wrong”.

It’s a PC-plus era rather than a post-PC world, the executive said (via The Verge):

Apple makes great hardware. The reality is in the OS we see things differently. They’ve talked about it being the post-PC era, they talk about the tablet and PC being different, the reality in our world is that we think that’s completely incorrect.

Funny thing how Apple’s flawed strategy led to sales of 410 million iPhones, iPads and iPod touches to date and cash hoard in excess of $117 billion. 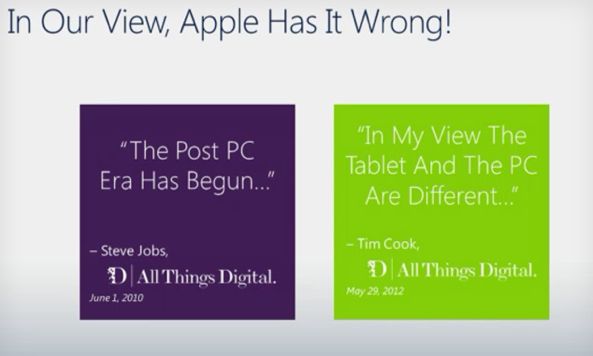 Now, Microsoft is hedging its bets on the upcoming Windows 8 operating system which is designed to scale from the tiniest smartphone screens to notebooks and desktops to badass 50-inch TVs.

Here’s another tidbit from the SEC filing, which sounds a lot like Bill Gates’ philosophy of tablet computing:

We actually believe Windows 8 is the new era for the PC plus. We believe with a single push of a button you can move seamlessly in and out of both worlds. We believe you can have touch, a pen, a mouse, and a keyboard. The reimagined Windows is a game changer.

Apple’s boss Tim Cook believes maintaining separate desktop and mobile operating system is the way to go. Noting recently that anything can be forced to converge, Cook likened Microsoft’s approach to a convergence between a toaster and a refrigerator that isn’t going to be pleasing to the user.

As The Loop’s Jim Dalrymple noted on Techpinions:

When Microsoft announced Office 2013 it’s not optimized for touch-enabled devices. Microsoft is telling its customers that the Surface tablet is important to them, but yet it’s most important application won’t work properly with the device.

Microsoft should be given the benefit of the doubt here. Let’s see how Windows 8 performs in the marketplace and if tablet and phone vendors embrace it as a third viable mobile platform.

If the company can prove that Windows 8 can run effectively on a multitude of form factors, it’s going to reinvent itself with a platform that could become a winner.

If it fails to sell the world on its PC-plus concept, Microsoft risks losing another decade.

Are you excited about Windows 8?