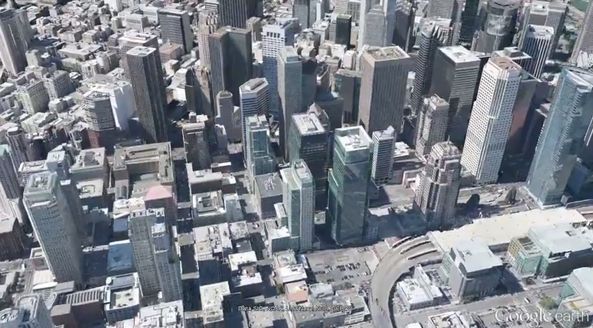 Google on June 6 held a hastily organized presser to announce “the next dimension in Maps”, in an effort to beat Apple’s in-house mapping solution unveiling which came five days later at the company’s annual developers conference in Sam Francisco.

While Apple Maps won’t launch before fall, when the company is set to release iOS 6 alongside the next iPhone and possibly a smaller iPad, the Internet giant is set to beat Apple by updating its Google Earth app for the iPhone with a new 3D view later today.

Months ahead of when Apple plans to bring its own photorealistic 3D maps to iOS, Google has beaten the company to the punch. Google today is updating its Google Earth app on Apple’s platform to include the same 3D imagery it showed off in early June. That same feature rolled out to users on Google’s Android in late June.

iPhone users are said to get 14 regions in glorious three-dimensional view, including Los Angeles, the San Francisco Bay Area, Boston and others. Going forward, Google is going to simultaneously add additional 3D cities on both Android and iOS platform.

• Tour guide: Explore places you never thought to search for with new tours of your favorite cities, historic landmarks and natural wonders.
• 3D imagery: Take flight above entire cities in 3D. Get started with Los Angeles, Boston, San Francisco, Geneva or Rome and look for new additions in the coming weeks. Available for iPhone 4S and iPad 2 or later.

Google Earth is a free unviersal binary download which supports both the iPhone/iPod touch and iPad natively.

Here are some screenshots.

The release marks a stark change in Google’s mapping strategy on iOS. For years, the company would prioritize its own Android operating system, often adding features on the iOS same months later, and some never at all.

But as the iOS maps war begin, Google is more committed to appease to iOS customers lest it lose its dominance in local search. And if it weren’t for competition, we would be still stuck with the old way of doing things.