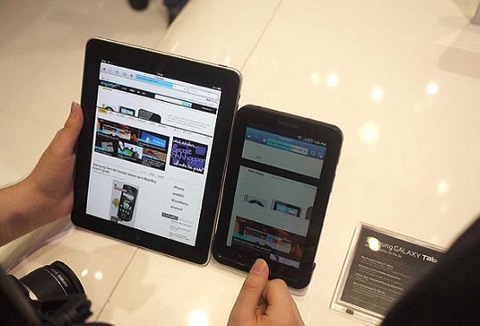 As we told you earlier in the month, a Judge in the United Kingdom ruled that Samsung’s Galaxy Tab tablets don’t infringe upon the iPad’s design because they’re “not as cool”.

This was followed shortly by another ruling requiring Apple to publicize the ruling on its website and in Britain’s high-profile newspapers.

Today, a London court ordered a stay until Apple’s appeal against the ruling is heard in October. As you know, Apple is thought to be unleashing the next iPhone and possibly mini iPads upon the world around September or October…

Apple Inc. won’t immediately have to publish a notice on its U.K. website that Samsung Electronics Co. didn’t copy its iPad tablet, a London court ruled today. […] Cupertino, California-based Apple appealed saying it didn’t want to advertise for its rival. The order is stayed until its appeal against the ruling is heard in October.

“Advertise for its rival”, that’s what this ruling really is.

Even Judge David Kitchin figured as much, noting in his ruling that “it would not be right to condemn Apple to such a fate before it has had a chance to argue its case”.

Here’s Joy of Tech‘s take on the situation:

I’m thinking that Apple in the case it loses this appeal could find itself in an uneasy position where it will be advertising a sixth-generation iPhone like there’s no tomorrow while also be forced to run a bunch of adds for Samsung and its tablets, both on its website and in British newspapers like the Financial Times, the Daily Mail, Guardian Mobile magazine and the T3 magazine.

Now, that could be really weird.

I mean, it won’t hurt Apple’s sales and might help Samsung move a few more tablets, but this is certainly going to be remembered as one of Apple’s bigger PR blunders, no?