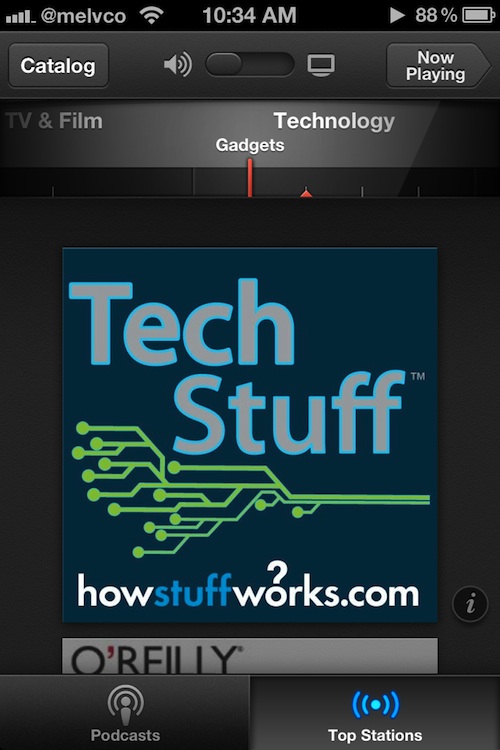 A month ago Apple removed Podcasts section from iOS 6 storefronts and posted a dedicated new app to let folks download, consume and manage audio and video podcasts on the go.

Apart from its skeuomorphic design mimicking a vintage tape recorder, the program was plagued with unreliable performance, unexpected quits and generally a bunch of bugs. These issues are clearly reflected in abysmal iTunes ratings that at the time of this writing barely hovered over two and a half stars out of five.

Our own Jeff Benjamin noticed as much, observing in his video hands-on that the radio-dial interface is interesting at first sight, but not very efficient and syncing often doesn’t work as intended. Today, Apple pushed out a minor update that promises to squash these pesky bugs while bringing out a couple of new nice-to-haves…

Apart from the obligatory performance and stability fixes, Podcasts for iOS version 1.0.1 also tweaks the interface by showing the number of unplayed episodes in your library. Additionally, podcast title now appears in place of missing artwork in Top Stations.

It also fixes an issue where playback speed wouldn’t be remembered when playing the next episode and hopefully enables more reliable iCloud syncing across devices.

Podcasts is a free download that supports both the iPhone/iPod touch and iPad natively.

John Paczkowski of AllThingsD first reported that Apple was about to launch a new version of Podcasts for iOS.

About that skeuomorphic radio-dial interface, did you find it repugnant?

Speaking of which, the whole interface could use some serious re-thinking, no?